In the seven months that we’ve lived on our boat, we’ve explored most of what downtown Pensacola has to offer within a 15 minute walk from our dock. We’d occasionally talk about picking up some bicycles for covering the middle ground between places that were within easy walking distance and those that we needed our cars to reach. But at only 37 feet, Eagle Too just doesn’t have the room to store full size bikes. So when West Marine recently put their Back Bay folding bicycles on sale, I was intrigued.

“What do you think of these?” I asked Rhonda, showing her the ad.

“They look nice,” she replied. “Maybe you should go look at them and see.”

So I did. And I liked what I saw. So we’re now the owners of a pair of folding bicycles. 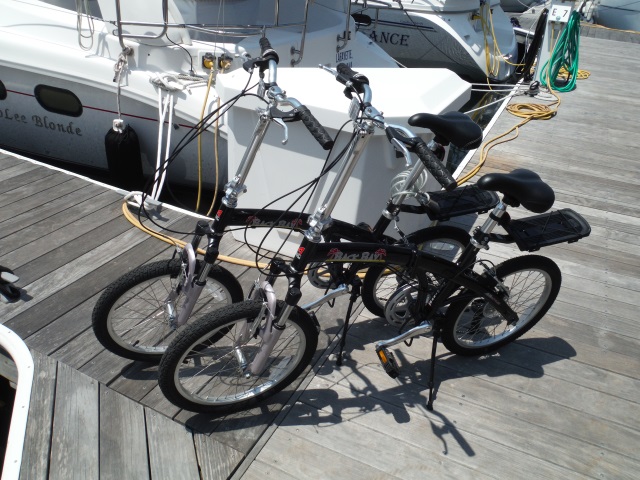 We’ve seen small folding marina or dock bikes before. I usually call them “clown bikes” because a grown adult looks pretty silly riding one. It’s because the bikes generally have 12 or 14 inch wheels, and look like something suffering from some strange form of mechanical dwarfism. These were different though. The 20 inch wheels, while still a bit small for anyone old enough to drive, looked a little less clownish. 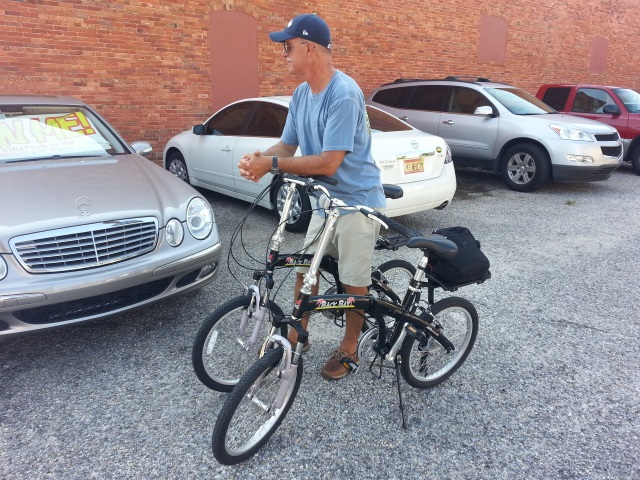 The frames, risers, handlebars, cranks, and wheels are aluminum, and the spokes are stainless steel. They was obviously designed with the marine environment in mind. They come almost fully assembled–you only need to insert the seat riser into the frame to get on and ride away (well, after you double check all the fasteners to make sure some Chinese laborer didn’t forget to tighten something, you know, important).

Best of all, starting with this: 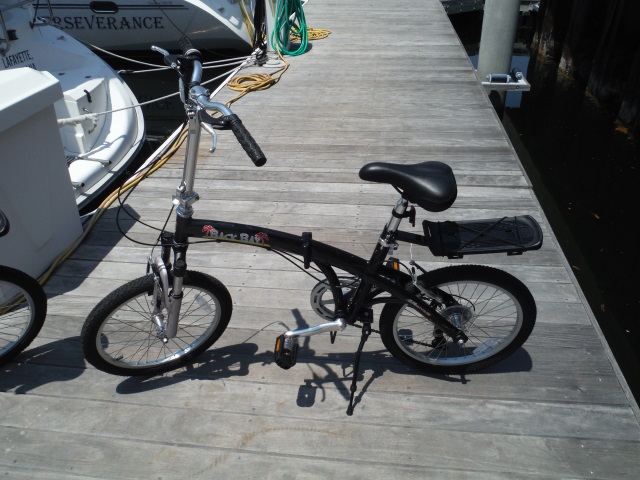 You just flip up the pedals and release one clamp at the base of the handlebar riser and another on the center of the frame, and you end up with this: 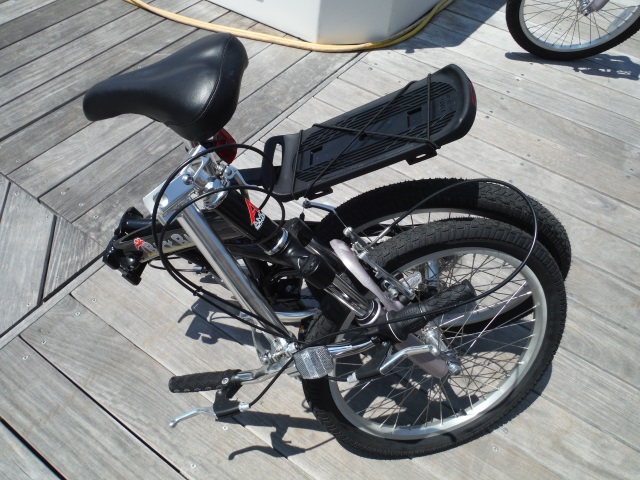 So how do they ride? Not bad actually. I’m six feet (1.8 m) tall and weigh 190 lbs (86 kg), and I think they feel very solid—there’s nothing about the ride to indicate that the bike is collapsable. The sprung front fork lets it float over bumps (and train tracks) pretty smoothly. The brakes grab hard—hard enough that you have to be a bit judicious in their use in order to not launch yourself off the bike when stopping suddenly. It has seven speeds, which I initially thought might be about three too few, but with some riding around I actually feel it’s just right. In first gear I can pedal up the ramp from our dock to the sidewalk with no problem, and in seventh gear on level ground I can easily cruise as fast as I’d care to go on a bike this size. The indexed shifter on the right handlebar grip operates smoothly, and the bike clicks solidly into each gear.

There is some getting used to it involved. Because the wheelbase, or distance between the front and rear wheels, is pretty short, you’re basically sitting directly above the rear tire when you ride. This is fine on level ground, but if you try to pedal while going up a hill, you have to lean forward or you can quickly end up in America’s Funniest Videos territory as you flip yourself off the back of the bike. I also think it’s a bit wobbly at slow speeds, like when just starting out from a full stop. It’s probably because you’re sitting pretty high above a small pair of wheels. Once you’re rolling though, it’s fine.

At $299.99, there are definitely cheaper folding bikes to be had. But they generally have more steel and less aluminum, which I think disqualifies them from use on boats. Plus most of the others we looked at had a step through frame similar to this: 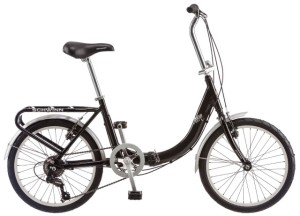 That just doesn’t look as rugged as the arch shaped frame on the Back Bay. Sort of reminds me of an old sway-backed horse.

I will say these bikes seem to have some issues with inconsistent quality. I initially ordered two. One was terrific. On the other, it was impossible to insert the seat riser more than a half inch into the frame, and it was very difficult to fold the bike at the frame hinge. But one thing I do love about West Marine is their no-questions-asked return policy. So I took it back to the store and swapped it out for another one they had in stock. Reading the online reviews, apparently others have had the same problem with the seat riser not fitting into the frame properly, as well as the folding issue. But we have two now that seem to be working well.

We hope that these will not only let us easily scoot around town, but also be of use once we get down to the islands. For their inaugural trip, last weekend Rhonda and I rode them up to Pensacola’s Festival of St. Fermin and the Running of the Bulls, which is a real hoot if you’ve never seen it.

After the “bulls” took off after the runners, we pedaled along following behind observing the general mayhem, and then circled back around to the finish line to watch the runners face the gauntlet.

Without the bikes, we’d have missed half the fun!

I’ll try to post something in six months or so regarding their durability and whether we’re still enjoying them.