It’s mid-July here on Florida’s Gulf coast, which means daytime temperatures are routinely approaching those found on the surface of the sun.  It’s peak air conditioning season, and our poor overworked system runs nonstop from dawn till way past dusk, steadily losing ground the entire time. While it’s a comfortable 72° (22° C) early in the morning, the temperature onboard can peak as high as 78° (25.5° C) by dinnertime before finally turning the corner and starting to decline again.

Unlike your typical home cooling system, most onboard AC systems are water cooled. A pump sucks up some of whatever water the boat is floating in (seawater, in our case) and uses it to cool the system’s condenser. If you understand anything about how an air conditioner works, you’ll know what that means. If not, the short explanation is that all the heat the air conditioner sucks out of the air has to go somewhere, and that somewhere is the seawater. Naturally, proper care and feeding of the AC system is priority one at the moment. This means regularly cleaning both the air filter and the seawater strainer.

Now the problem with using seawater to cool the AC condenser is all the microorganisms it contains. If you had any idea about the quantity of jellyfish eggs, oyster larvae, baby barnacles, and fish semen that every quart of ocean contained, you’d never swim in it, much less get any in your mouth, nose or ears. Most of those microorganisms are just drifting around looking for a safe place to homestead so that they can put down roots and grow up to be bigger organisms and make their own eggs and babies. Unfortunately, many of them do so inside the air conditioner’s heat exchanger. Over time, this buildup of marine growth will foul the condenser, reducing your air conditioner’s ability to make cool refreshing air.

If you read the owner’s manual for your system, you’ll see that it says that you should periodically (annually?) flush the unit’s seawater system with a mild acid solution. This is supposed to kill any marine growth that may be forming and dissolve the barnacle farm that sprouts wherever there’s seawater touching a solid surface. You basically fix up a bucket of muriatic acid solution and use a small pump to circulate it through your unit’s heat exchanger.

Personally, I think it’s similar to flossing after every meal. We all know we should, but who honestly ever does it? I’m guessing it’s the pretty rare sailor who has a bucket, circulating pump, jug of muriatic acid and some suitable hoses sitting around waiting for its once-a-year use.

Now we boaters have a solution to deal with marine growth on the underwater portions of our boats. It’s called bottom paint. Marine bottom paint is a special type of paint that contains toxins to kill off or keep under control all the little critters floating around in the water. The most commonly used toxin in bottom paint is copper. Each gallon of bottom paint contains several pounds of ground up copper, which forms a layer on the bottom of the boat that tells the little ocean critters, “Move along, you’re not welcome here, go try your luck elsewhere.” It occurs to me that if it were possible to get some copper inside the air conditioner’s heat exchanger, maybe it would help slow down the buildup of growth inside the condenser, and reduce the need to acid flush it, which quite frankly isn’t being done anyway.

While turning this over in my head one day, I recalled how when we used to live in Washington (the state, not the city), everyone was constantly fighting moss and mildew growth on their roofs. At its best it was unsightly, at its worst it made some roofs look like putting greens with their luxuriant mossy coats. But an easy fix to the problem was to attach some zinc strips along the peak of the roof. You could buy a roll of it at the local hardware store. As it rained, a tiny bit of the zinc would dissolve and flow down the roof, killing the mildew and moss. I guess they are zinc intolerant.

So here’s where the boat hack comes in. I thought the same basic idea might work with copper. So I bought a package of copper plumbing fittings at Lowe’s. It cost about three dollars for ten ½” slip couplings. Then when I did my monthly cleaning of the system’s seawater strainer, I dropped a couple in the strainer basket. The strainer is plastic (nylon I believe), but even if it were stainless steel, copper is much higher on the galvanic series, so it shouldn’t hurt the strainer. (Don’t worry if you don’t know what that means. It’s technical. Unless you own a boat. Then you should be very worried!)  As the seawater flows through the strainer, it should pick up some dissolved copper. Not much, just some ions, but it shouldn’t take too much to make the inside of the heat exchanger less hospitable to ocean critters.

Will it work at reducing marine growth inside the condenser? I have no idea. But at about 30 cents per copper fitting, it’s a cheap experiment. I’ll monitor the fittings at each monthly strainer cleaning to see if I can notice any reduction in their size, indicating that they are slowly dissolving. Please let me know if you think I’ve overlooked something. 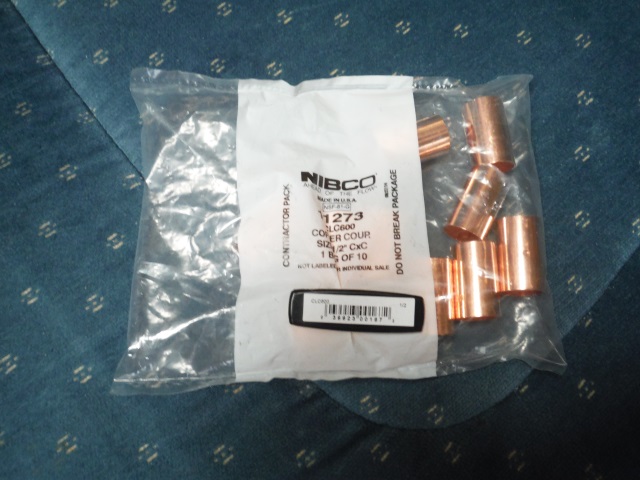 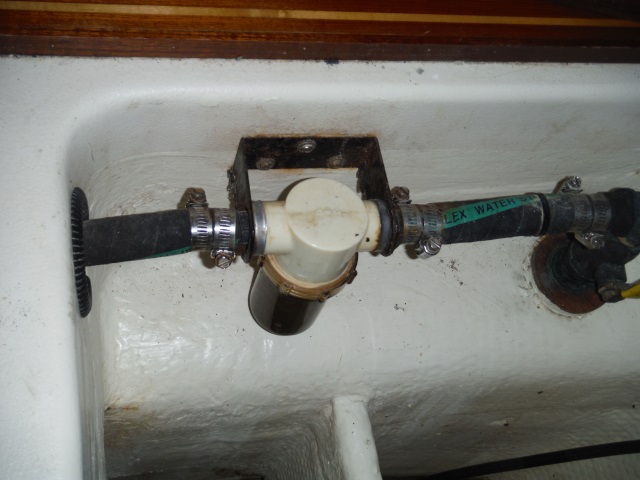 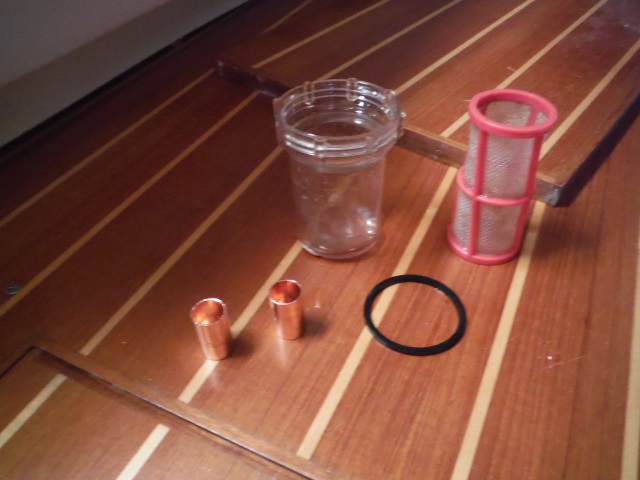 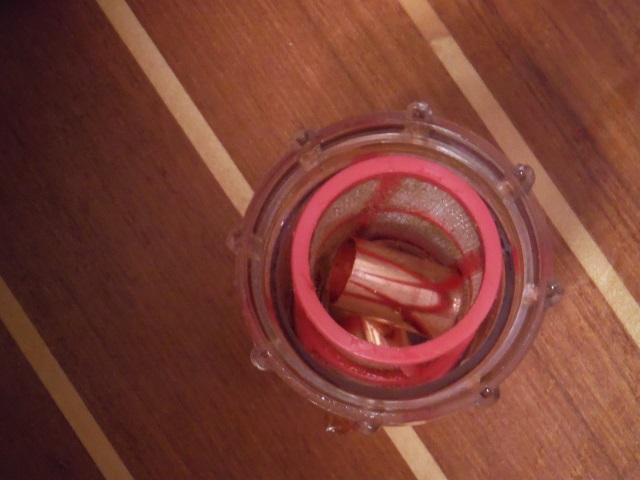 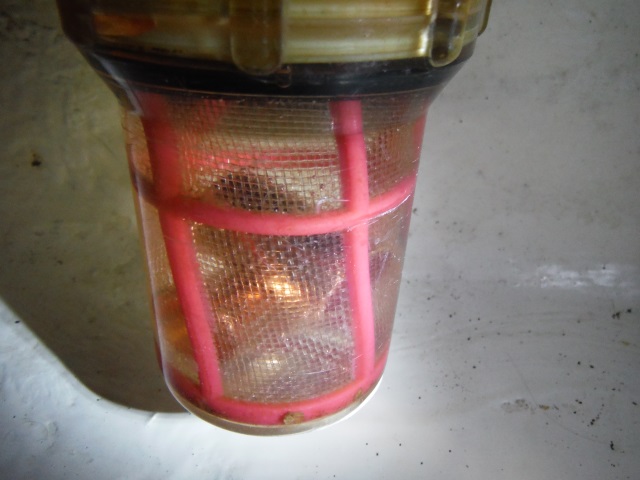