The old woman shuffled hesitantly down the steps of the tour bus. She gripped the handrail tightly with her thin, veined hands, pausing on each step to cautiously plant both feet before attempting the next. I sighed with impatience as I stood behind her waiting to exit the bus. We were halfway through our Alaskan cruise, and wherever we went, the elderly with their walkers and wheelchairs were causing slowdowns and creating congestion at elevators, buses, theater doors, gangways.

Sensing my frustration, the old woman turned to me, and with a gentle smile tinged with sadness, said, “I’m sorry I’m taking so long. But I was 20 once…”

Suddenly I saw the world from her perspective. An old woman, aware of her limitations and her impact on others, wistfully recalling the vigor of her youth and sadly resigned to its passing. Instead of pushing past her, I wanted to hug her for having the desire and courage to continue heading out into the world in pursuit of new experiences and adventures.

Then there was the Westerdam. The Holland America ship was our buddy-boat on our trip north, leaving from the same Seattle pier as us and following the same itinerary. 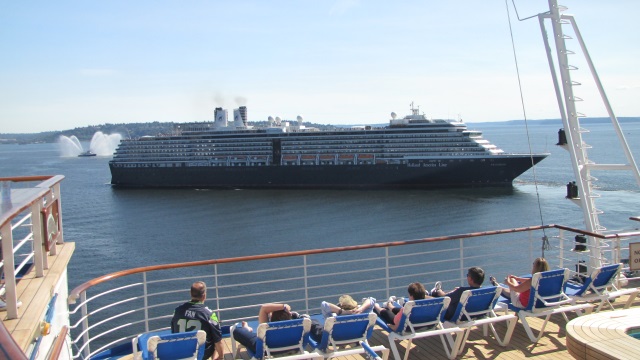 They moored ahead of us in Ketchikan, where eight passengers boarded a floatplane for what was probably an excursion of a lifetime—a flight to the remote Alaskan wilderness.

Now some would say that those eight people and the pilot who flew the aircraft, who was also lost, would have been better off staying home and quietly rocking away their lives on their front porches. But I know that we humans are extremely bad at evaluating relative risk. The truth is that the odds of those nine people meeting an unfortunate end during their flight was much less than the risk of being killed while driving to the grocery store.

By now, our close circle of friends and relatives have heard about our plans and have reached their own conclusions. But on this trip we had the opportunity to tell newly made friends and far flung family about how we plan to spend the next five to ten years of our lives. Their reactions were varied. Some instantly got it and said “That sounds so exciting!” Some frowned and pursed their lips, unable to understand why anyone would want to take the road less traveled.  But one of the takeaways for me from this trip was a reminder that none of us knows how many pages are left in the story of our lives. It’s so easy to fall into the monotonous rhythm of daily existence that we fail to appreciate what a gift each day truly is and that tomorrow is not guaranteed.

We live for a short while, and then we die. I know that many are perfectly content to spend their brief time on Earth tending a garden and accumulating things. But I think a day in which you see something new, experience something new, learn something new, is a day well spent. I’m more convinced than ever that doing this now, while we’re still young enough, healthy enough, flexible enough of mind and body, is the right thing to do. I have to admit though, I do so hope that like that old woman on the bus, Rhonda and I will still be holding hands and venturing out in search of new experiences and memories long after most have settled into their rockers.

We had an amazing trip. We definitely added to our collection of memorable and photo-worthy moments, and never fear, there will soon be pictures. I just needed to first get this off my mind.

One thought on “Reflections On Mortality”