I recently started a discussion on Cruisers Forum about whether life rafts still made sense (or cents, as I phrased it). I quoted from an article I recently read in which a USCG rescue pilot claimed that with the state of today’s international search and rescue system, the average time from activating an Emergency Position Indicating Radio Beacon (EPIRB) until a helicopter is hovering overhead is 240 minutes. In light of that fact, I wondered whether, if you were going offshore, it made sense to sink $6K into a liferaft considering it would probably never be used, and if it were, probably only for a few hours.

In the subsequent discussion, someone recommended I read a book titled Once Is Enough by Miles Smeeton. It tells the story of a British couple that attempt to sail their 36 foot ketch from Australia to England by way of Cape Horn. 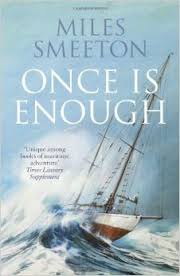 I won’t give the story away, other than to say that they didn’t have an easy time of it (you did notice that I said they attempted to sail the route, right?).

I thought it was a fascinating story. It’s a bit dated, having been written in the 1950’s, but if you like classic survival and us-against-nature tales, I think you’ll enjoy it as well. I have to wonder if we’d be as capable and determined sailors if God forbid we ever found ourselves in a similar situation.