As we cruise about our local waters, we have often observed on other boats an interesting division of labor that I like to call Deck Princess Syndrome, or DPS.  It appears to be primarily a powerboat phenomenon, although we have occasionally observed it onboard real boats as well (i.e. sailing craft). It manifests itself as follows: A large boat approaches the pier or an anchorage and prepares to tie up or drop anchor. An individual of the male persuasion is at the helm, actively operating the wheel and throttles. He then shifts the boat to neutral and runs forward to unlimber the anchor or rig lines and fenders, and then runs back to the helm to aim the boat as his intended target. Satisfied with his trajectory, he runs back to the bow again to drop the anchor, or jumps ashore as the boat comes alongside the pier in order to tie up. At some point a wrestling match often ensues between the man and the boat as the craft fails to completely bend to his will. During this entire evolution, an individual of the female persuasion lies on deck working on her tan or idly examining her fingernails with an intensely bored expression.

While DPS is not entirely a powerboat phenomenon, on sailing craft we are more likely to see symptoms of Harried Deckhand Disorder, or HDD. In cases of advanced HDD, what appears to be a healthy mature male stands at the helm in a stately manner, using three fingers on his right hand to operate the throttles and shifter, while shouting a stream of commands to a woman jumping around on deck. Using extravagant gestures and escalating vocal volume, he remotely directs her through the process of anchoring or mooring, while she scampers like the proverbial one-legged lady in an ass-kicking contest, straining at lines.

Now everyone has to work out a functional system for themselves and their crew. But here’s our situation onboard Eagle Too. I am taller, broader, and stronger than Rhonda. I’m able to leap further, have a longer reach and better grip strength. These are all attributes that are quite useful when trimming sails, recovering the anchor, or mooring—your general deck monkey chores. Meanwhile, wheel and throttle work is a precision task, requiring little physical strength, but for which an intuitive feel for force, direction, motion and applied vectors is required. It’s much easier to hone the skills to helm through practice than it is to develop sufficient upper body strength for deck monkey work. So why do we see so few women at the wheel during docking and maneuvering?

I’ve jokingly told others that Rhonda drives because if I ever fall off the boat, I want to know that there’s someone onboard who will be able to come back and get me. But like most effective humor, there’s a kernel of truth in that. It’s apparently a rare enough arrangement that we quite often have people stop what they’re doing in order to watch Rhonda back us into our slip, as if it’s as unusual and unexpected as spotting a cat riding a bicycle. “Observe, ladies and gentlemen, as the lady tempts fate and courts disaster by approaching the dock! And for her next trick…”

Anyway, it sort of makes me wonder. Why aren’t there more women at the wheel? 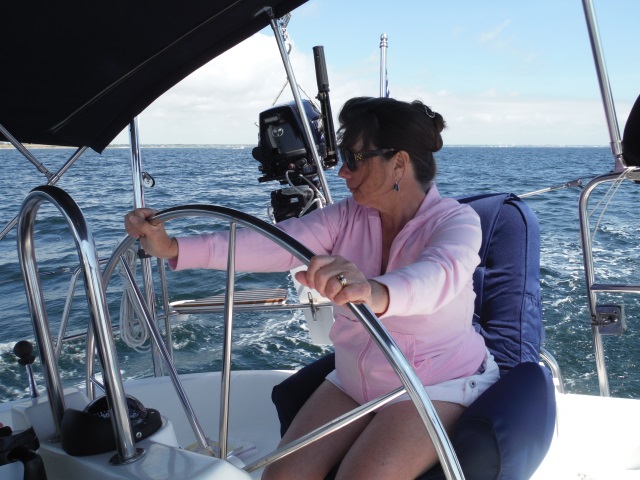