If plans stay on track, by this time next year Rhonda and I should be deep in the southern Caribbean. It’s primarily an insurance thing. If we want to carry storm coverage for our boat, we need to be outside of the hurricane box by June 1st. Of course, the whole issue seems absurd to me. Being from Florida, we LIVE in the hurricane box, and we have no problem obtaining insurance year round. But if we set sail, then suddenly we have to be south of the box (or north or it, but there’s no appeal there for us) when the season starts or lose our coverage. I guess it makes sense to an actuary somewhere. But it is what it is and pointing out the logical fallacy won’t change that, so we’ll plan accordingly.

Because this could be the last summer we spend in our hometown for quite a while, we’ve been busy trying to take in as much of the local color as possible. We all know how you can live in a place for years and never see or do much of what’s happening in your own backyard. Well, we’re making an effort to change that. We’ve been to more free concerts so far this season than we attended in the previous five years. With Tuesday’s Bands On The Beach, Thursday’s Evenings In Old Seville, and the occasional Sunday of Blues On The Bay, we’re taking full advantage of the numerous opportunities to spread a blanket, crack a bottle of wine, and take in some live music.  We sit on our boat and watch the weekly fireworks shows at the baseball stadium across from our marina. We’d never bother to come downtown to see them when we lived on the north side of town. And of course, if there’s a concert or festival within a half day’s sail (and the weather allows), we go, because who knows when we may have the chance again.

This past weekend, Steve Miiller Band was performing in Orange Beach, and a friend with connections to a local radio station hooked us up with free tickets. Since we still had a credit at The Wharf marina from our trip to see Jimmy Buffett in April, it didn’t require much deliberation. Friday after Rhonda got home, we headed out.

We had a most interesting night at anchor in Big Lagoon. 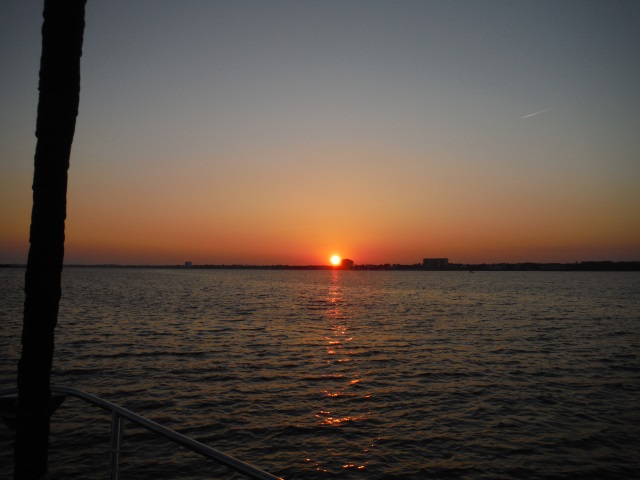 As the sun set, we heard a strange persistent sound whose source we couldn’t quite determine. It was an odd sort of insistent rhythmic clicking that sounded like an army of distant jack hammers. It would rise and fall in intensity, sometimes falling totally silent, and then resuming after a brief pause. Its volume was startling. We worried that something was wrong with the boat. My inner engineer started mentally dissecting our onboard systems trying to tie the noise to a piece of malfunctioning equipment. After cycling through all the breakers on the panel, we eventually killed all onboard power, and sat motionless in the dark stillness, listening. The sound persisted. It was coming from the surrounding environment.

Climbing on deck in the darkness, we caught sight of a pod of dolphins about 30 yards off that seemed quite busy, swimming rapidly about. And then the pieces fell into place. They were working a large school of fish, which we were apparently sitting in the middle of. In their distress at being hunted and herded, these fish were communicating their panic, which was filling the water with the cacophonous sounds of a million tiny hammer drills. Relieved, we powered the boat back up, turned on some quiet music, poured another glass of wine, and sat back to listen to nature’s soundtrack. Fortunately, after several hours the dolphins ate their fill and moved on, and we were able to have a peaceful night’s sleep. Otherwise, I don’t think we would have been able to get much rest. It was that loud!

The next day, after tying up in our favorite slip at The Wharf… 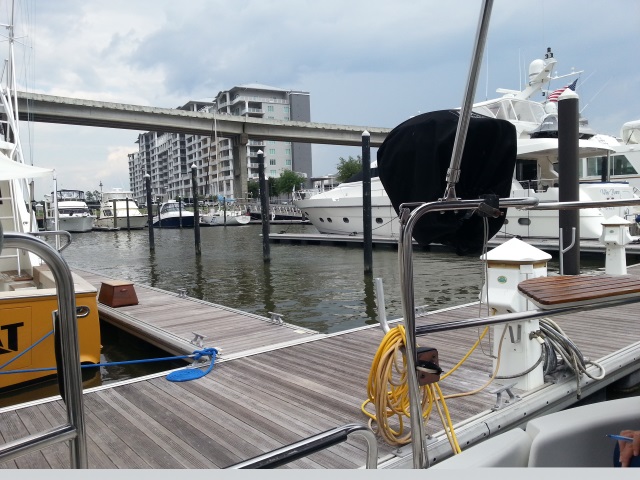 …we sat for a while and watched the resident heron fish the surrounding docks. 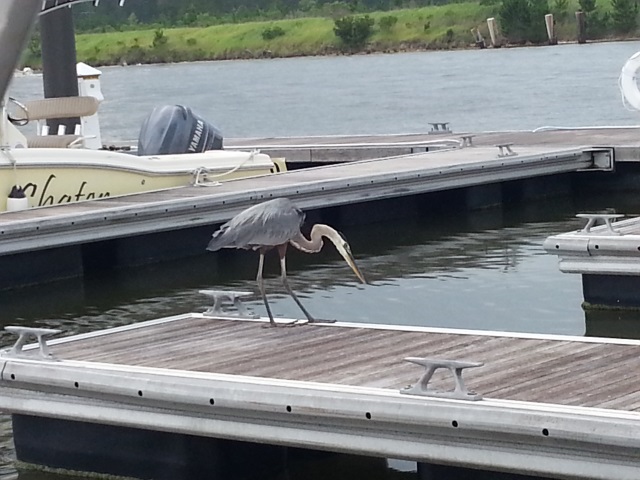 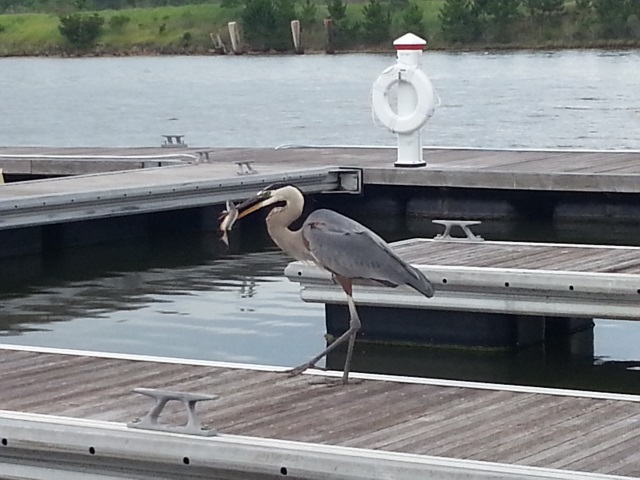 He didn’t seem the least bit bothered that we were sitting less than 15 feet away taking his picture.

The show wasn’t bad, certainly worth what we paid to get in (which was nothing, after all). 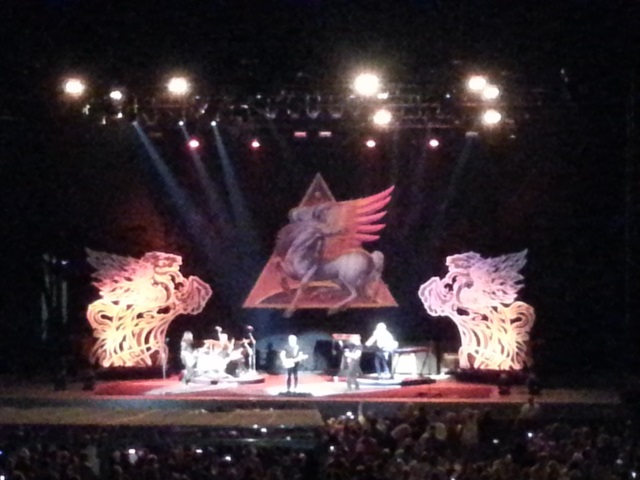 The biggest surprise of the evening for me came when Steve was casually relating to the audience that he started his first band in 1956 when he was 12 years old. I quickly ran the numbers in my head, and holy crap! He’s 71 years old! Has it really been four decades since I was sitting in the school cafeteria listening to The Joker on the jukebox? Man, where did all those years go?!

We chilled for another day in Orange Beach, and then had an awesome trip home, sailing a beam to broad reach the entire way in 12 knots of SSW wind. It’s always a delight when we can make it to our destination entirely under sail. 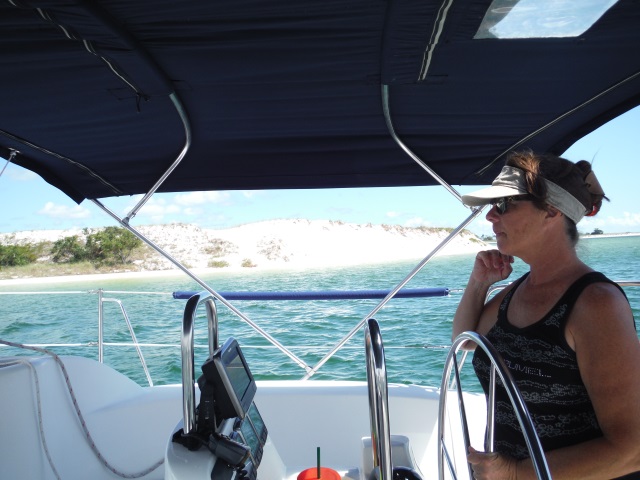 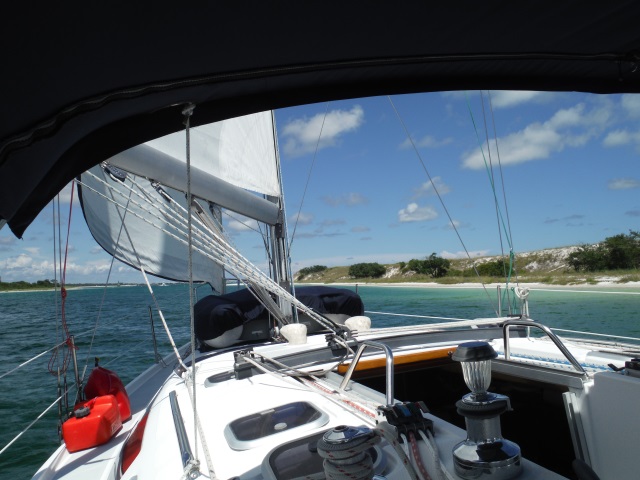 And so we’re off to whatever event next catches our fancy in this Summer Of Taking It All In. I think Wednesday was the only opening in our social calendar this week. Today (Thursday) is Rhonda’s birthday, and we’ll have a nice family dinner at The Fish House. The fine folks at Pensacola Shipyard have invited us to their Shipyard Shindig tomorrow, probably in appreciation for the multiple boat bucks we’ve deposited in their account. This weekend is currently a blank slate, but I know something will come up, and we’ll say yes, because who knows when we’ll have the chance again.

There has been an old tune playing on a loop in the back of my mind lately that I feel perfectly captures the essence of this particular moment in our lives: