We have a monster aboard. A malevolent force toys with us in the darkness, haunting our dreams, robbing us of precious sleep. Will it strike tonight? Who knows.  We retire each evening uncertain whether we will once again be preyed upon. It attacks at a time of its own choosing. There is no warning, no trigger, no pattern or cause that we can determine. We only know that it comes in the dead of night. 3:00AM give or take an hour, a time when we are most vulnerable and defenseless. We feel its evil presence lurking near our bed, watching us, waiting for its moment. We’re left to wonder “Why us? What offense did we commit to bring this terror in the night down upon us?”

With some effort, I managed to capture its image. I shudder as I gaze upon its evil countenance. 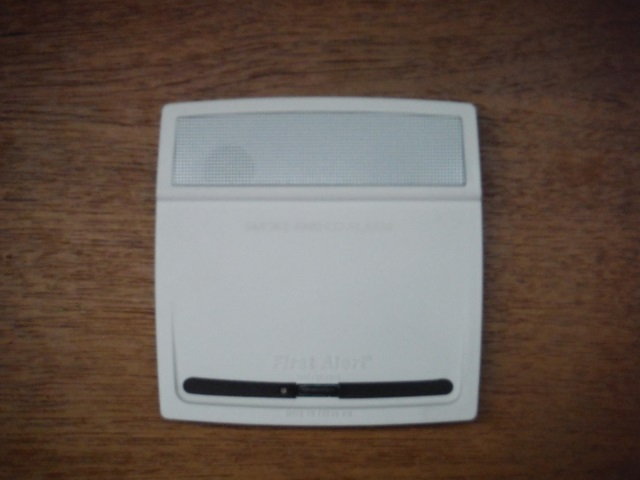 It is the carbon monoxide detector from Hell. Don’t let its unassuming appearance lull you into complacency. When it strikes, it shrieks with the sound of a thousand tortured souls subjected to the torments of eternal damnation. It is completely and truly possessed.

We know carbon monoxide (CO) is a silent killer, and we take precautions to protect ourselves. Not so much because we’d contemplate going to sleep while running our propane heater or generator, but more as protection from those around us. I read a report once of a couple who were overcome in their sleep by CO, the source for which  was traced to a generator running on another boat further upwind. Now like most things with the word “marine” in the name, you can purchase a CO detector that’s UL rated for marine use for about four times the cost of a consumer grade equivalent. Wanting to provide some level of CO protection but not wanting to drop a significant chunk of change, on our previous boat we mounted a consumer grade CO detector we purchased at Home Depot for $30, and in four years never had a problem with it. So while working through our list of upgrades for Eagle Too, we once again popped into Home Depot and picked up a cheap detector.

This time we haven’t been as lucky. On three separate occasions now we’ve been ripped from a quiet and restful sleep by the sound of a firetruck screaming through our aft cabin, punctuated by loud shouts of “EVACUATE! EVACUATE! CARBON MONOXIDE!” Yes, the cheeky little thing speaks our language, and does it with authority. Each time this happened, we were moored in our slip, tied to the pier, plugged into shore power. The air conditioning was running, and the hatches were all closed. Nothing on the boat that could produce CO was operating, and we couldn’t hear any sounds from outside the boat that would indicate an external source.

Maybe the damn thing was just lonely. Or possibly bored. Watch me make the people jump may have been running through its little battery powered mind. All I know is that once is a fluke, twice indicates there may be a problem, and three times says “this damn thing has got to go.” I would think that if we truly had some mysterious and unidentified source of CO onboard, we’d see it at times other than 3AM. And when we finally yanked the little shrieking demon off the bulkhead and threw it on the chart table, it quit its crap and started behaving.

Are the aroma beads Rhonda likes to place in the aft cabin to blame? Something we’re using to clean the head? Late night engine farts? Who knows. For now, we decided maybe First Alert isn’t our favorite brand of CO detector. We’ve purchased a unit from Kidde as a replacement. Since that’s the brand of our fire extinguishers as well and they are therefor of the same tribe, I’m hoping they’ll keep each other entertained and leave us alone to get some much needed sleep. 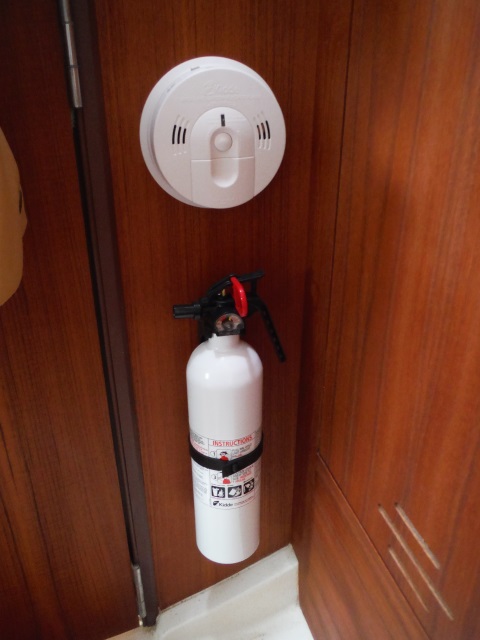 Now I think I need a nap…