I awoke early in eager anticipation, anxious to begin this wondrous day. As Rhonda headed for work, she pointed out that I was apparently not the only one who felt today was worthy of special recognition. I was delighted to see that an equally excited soul had turned our marina fountain into a festive visual celebration to mark this auspicious occasion: 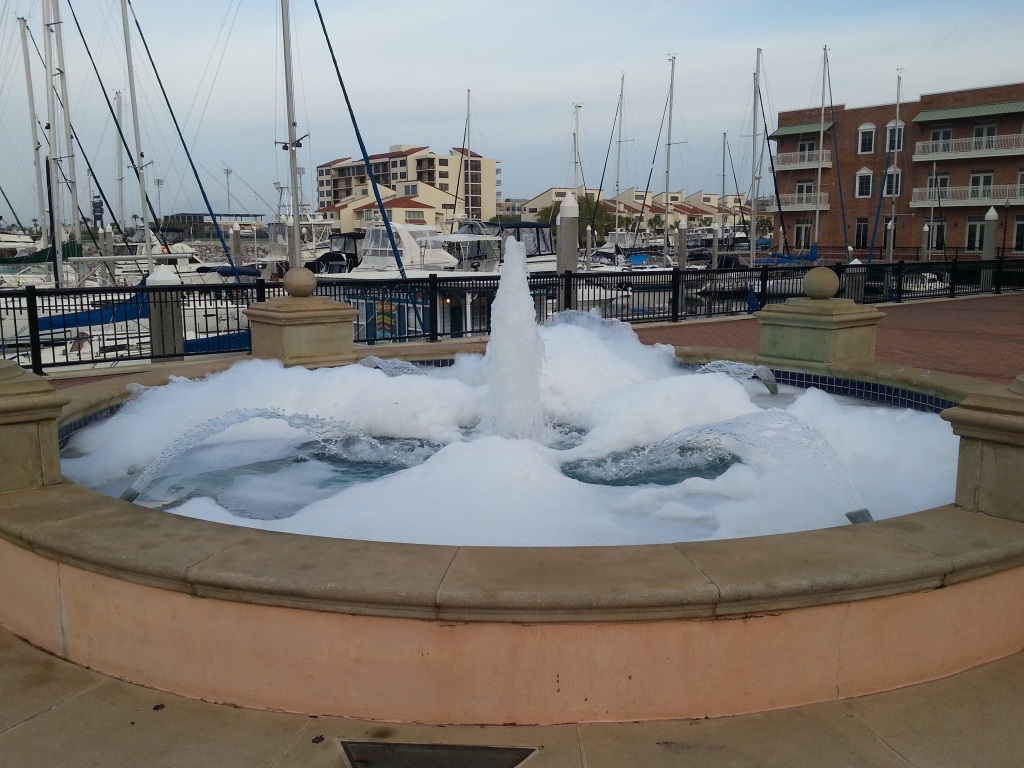 A Fountain Full Of Foam

This time last year, we were in the final stages of negotiating the purchase of Eagle Too. We knew she urgently needed some upgrades, and not wanting to miss the year’s lowest prices on marine equipment, we took a chance and ordered, hoping the deal for the boat would work out. Thankfully, the gods smiled and the planets aligned, and when we took possession of our new home, we had a small pile of new gear to bring aboard.

This year, after the long cold  Time For Thinking, we have a much bigger list of gear and essentials we desire to make Eagle Too the cruiser we know she so much wants to be. An autopilot to help stand watch on long passages—a robust below decks model rather than a fragile wheel pilot. Radar to pierce the dark of night and thick veil of coastal fog. An AIS system (Automatic Identification System) to address Rhonda’s fear of being run down by a barge or freighter. New lines to replace those too frayed to carry on. Hatches and lights and an assortment of miscellaneous hardware that will keep us busy installing, testing, and fine-tuning through the spring and probably most of the summer.

The list had been groomed and refined by a year of research and deep thought. My shopping cart was full. Payment and shipping information entered. The only thing now was to watch the remaining seconds tick away until the sale began. At exactly 9:00 Eastern time, I watch the prices tumble and the savings accumulate. I know it’s oxymoronic to say “look at how much I saved” when you’re spending a pile of boat bucks. But in this case, once the numbers stopped spinning, Defender’s discount left us with enough to also grab the sweet little Honda EU2000i Companion generator we’ve been lusting for. I pushed the Buy button, sighed, and sat back in satisfaction.

Yes, it’s a truly wonderful time of year. I hear Hallmark is planning to print cards… 🙂

Editor’s Note: Due to conflicting demands on our time, this post, initially planned for March 26th when the Defender Warehouse Sale started, didn’t get published until March 29th, the last day of the sale. That means today’s your last chance if you want to grab some items on your wish list at the year’s lowest prices. And no, we still aren’t getting any promotional consideration from Defender. But just like last year, we’re open to it if they suggest something lucrative. Hint hint.