Our boat is more than just our home. If you asked her, Rhonda would probably tell you that it’s also a giant toy that I’m constantly playing with. I take endless delight in planning an improvement, researching the parts, tools and techniques needed, laying everything out, and doing the work. Once finished, Rhonda will usually find me repeatedly flicking the switch that activates whatever new gizmo I’ve installed, or just standing and admiring the result of our labor, fighting to suppress a silly grin born of a sense of accomplishment.

One of my favorite games is called “How can I make this better without spending a fortune?” While I get great satisfaction from a repair done well, in the end, all we’ve done is restore something to service that once worked. No, the thing that really makes my day is improving something so that it works better, or adding something that will make our lives a bit easier. Yesterday was a good day, because for less than $12, I accomplished both.

Our boat has some recessed indirect lighting along both sides of the main cabin. I guess the designers probably intended it to be mood lighting, something to turn on during boat shows to motivate people to open their wallets and dig deep. But we never used it. If it was intended to generate a mood, the only one that comes to mind is dark depression. The dull browish-orange light was too dim to actually illuminate anything, while using almost two amps of current. It didn’t even make a good night light. The small indicator lights on various pieces of gear or even our charging phones put out a much brighter glow. 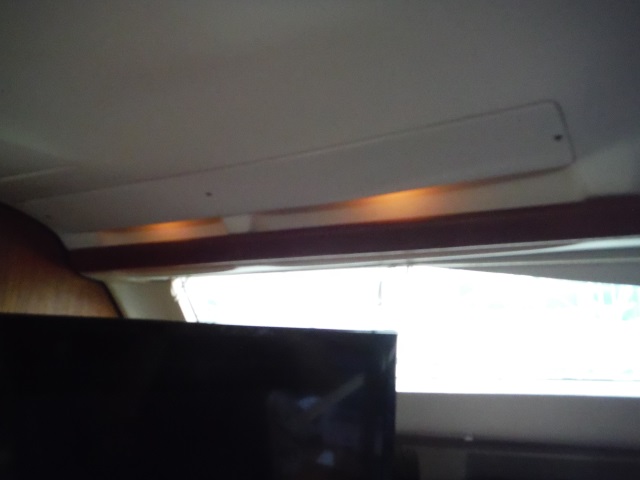 But then while poking around on Amazon one day, I found this:

Sixteen feet of adhesive backed 12 volt LED light ribbon. For less than $12. Why not, I thought. It was worth taking a chance on for only twelve bucks. I choose the warm white 3100°K. That temperature color seems to work better if you still have some incandescent bulbs around. The cool white 4000°K just looks too bluish and harsh in comparison. 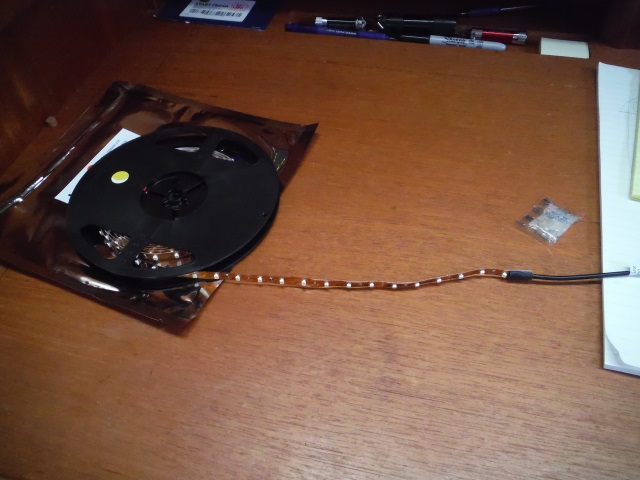 It already had a power connection soldered on, so I plugged it into a 12 volt power supply. 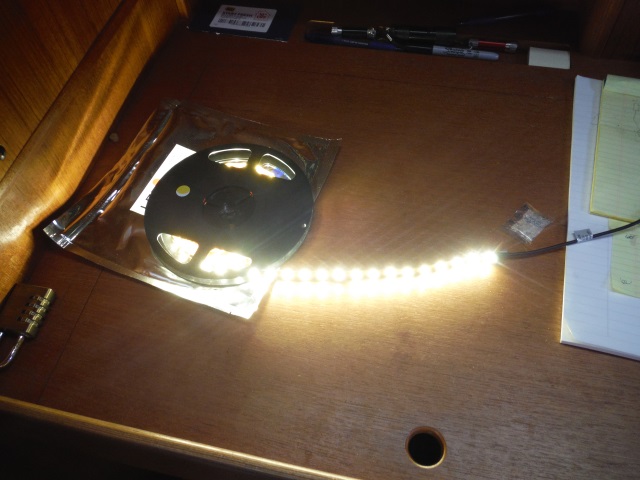 Wow, that’s bright! One cool thing about it is that you can cut it to virtually any length. The scissors symbols spaced every three LEDs show you where to cut. Each segment has two little pads that you can then solder leads onto to continue to use the remainder. 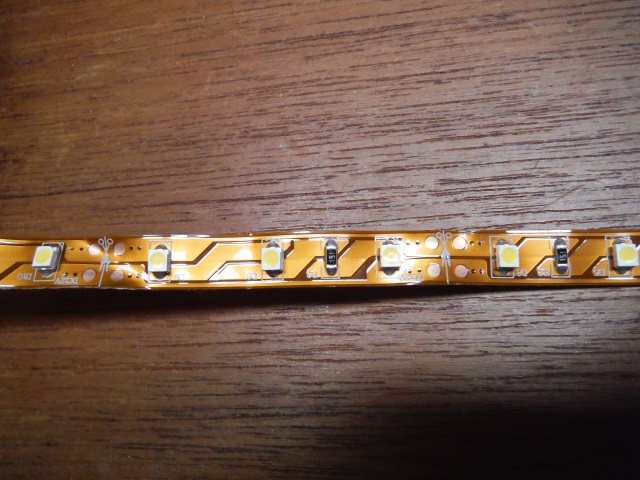 I removed the fascia from the recessed lights in the galley and cleaned the fiberglass with isopropyl alcohol to make sure the adhesive on the ribbon had a good clean surface to adhere to.

I clipped the wires to the existing lights and crimped them to the leads on the LED strip, and then peeled off the backing to expose the adhesive and began pressing it in place. (I left the original lights in place just in case this doesn’t work out long term) 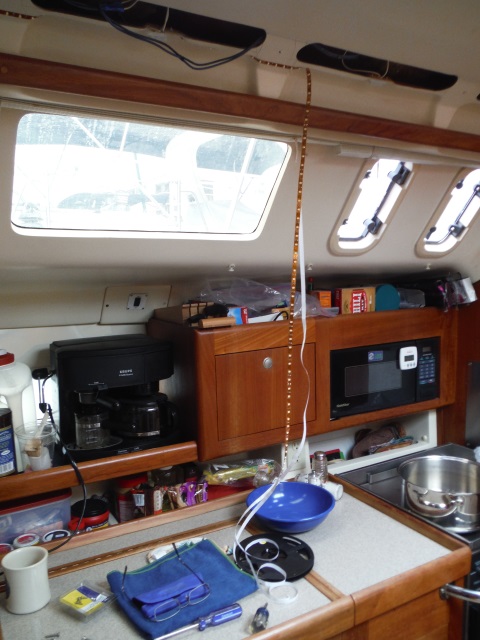 Once I had it all applied, I replaced the fascia, stood back, and flipped the switch. 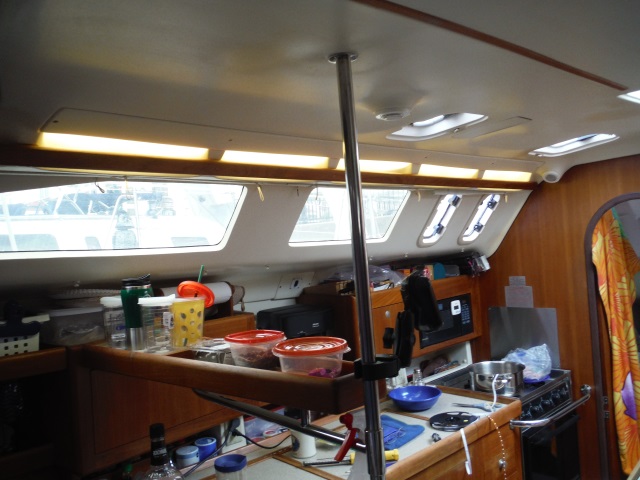 Now that’s what I’m talking about! It’s always been a bit dim in the galley at night, and Rhonda sometimes even has to resort to using a flashlight when refer diving. But about six dollars worth of LED tape and an hour of my time produced this result: 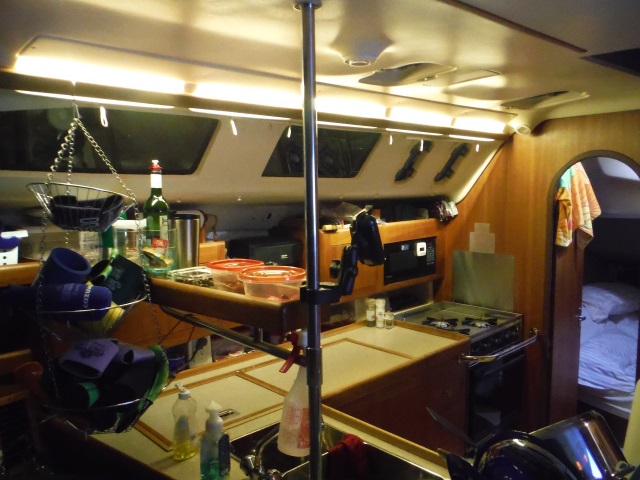 The hard part now is to stop myself from going crazy with this stuff. I mean, there are so many places where we could use more light. Inside lockers, under shelves, and maybe a  nice warm glow emanating from under the settees as we relax with a bottle of wine…

OK, I’m taking a step back here. Put the LED ribbon down, Robert. The truth is I have no idea how durable this product will be. There’s nothing “marine” about it, a fact reflected in the price. I actually found what appeared to be the same product at West Marine recently, for the not very similar price of $99.99. Theirs did look like they had added a clear polyurethane cover to the ribbon, which I assume makes it somewhat water resistant. Maybe the sticky backing tape will unstick in summer heat. Maybe the LEDs will fry in the less-than-constant voltage we have on boats. But for $12, what the hell, it was worth taking a shot. And we can see so much better in the galley now.

Editor’s note: It’s only been a week since I ordered this product, but I see they’ve already upped the price a bit (it was $11.77 when I bought it) and have started charging for shipping. I got it through Amazon Prime with free two day shipping, but it’s not available through Prime any longer.