Well, it’s that time of year again—time to render unto Caesar what is Caesar’s. With lots of projects in the offing and April 15th right around the corner, I thought I’d use this brief lull while waiting for parts to arrive to sit down and settle up with Uncle Sam. Now this is not going to be a tax rant. As a former Federal employee and now a government retiree with a pension (at least that’s what they tell me. Still waiting for the checks to start arriving!), I realize I’ve come out way ahead on that balance sheet. But it still amazes me when I see how much money the government requires from us each year so they can give it away “free” to other people to buy their votes.

We knew that once we moved onboard, our storage space would be extremely limited. With no room for a filing cabinet, we plan to keep mostly electronic records, which means we need the ability to scan documents. We also have the occasional need to print something, and it seems like a good idea to have a copier around, just in case someone needs a copy of our ship’s papers when we’re checking in somewhere someday. So shortly after moving aboard, I spent a few days researching the issue, and then bought a compact all-in-one printer/scanner/copier. 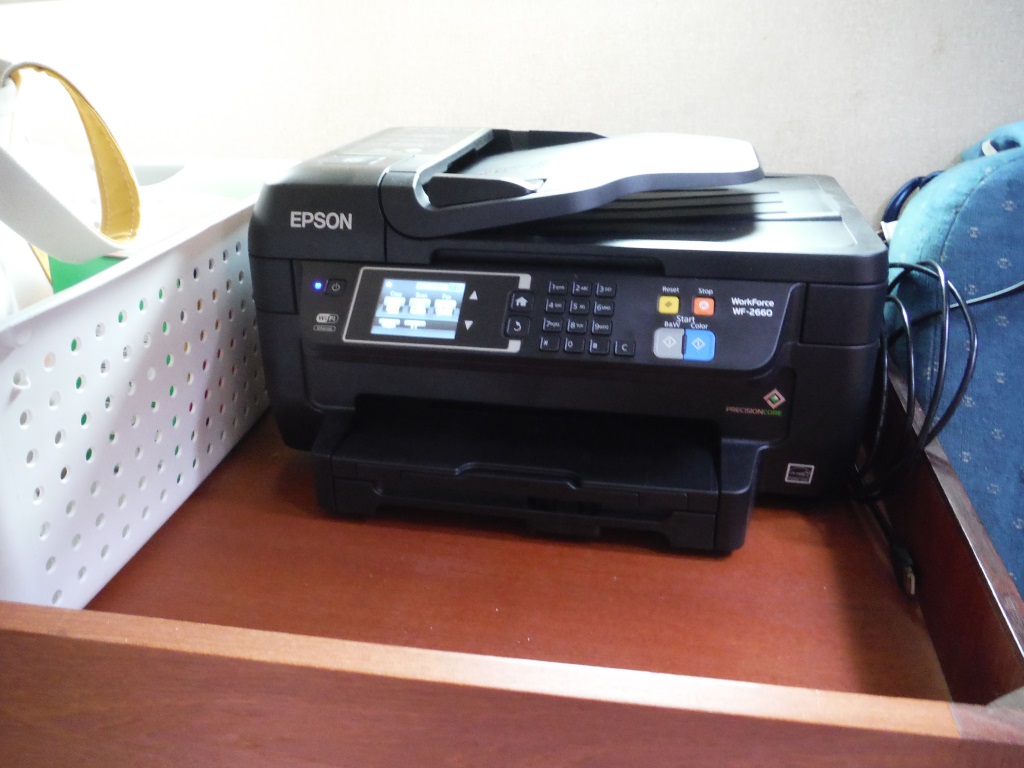 It’s an Epson WF-2660, which was the smallest unit I could find that would do pretty much everything we were looking for. Duplex printing, automatic and flatbed scanning and copying, and it can handle paper up to legal size. I guess it can even fax, but does anyone truly care anymore? One feature I really liked was that it supports NFC. That means we can print pictures or documents directly from our phones by just touching them to the printer, no computer involved. Plus with built in WiFi, it will easily integrate into the boat network once I get a router set up. It fits really well on the cabinet at the foot of our berth in the aft cabin: 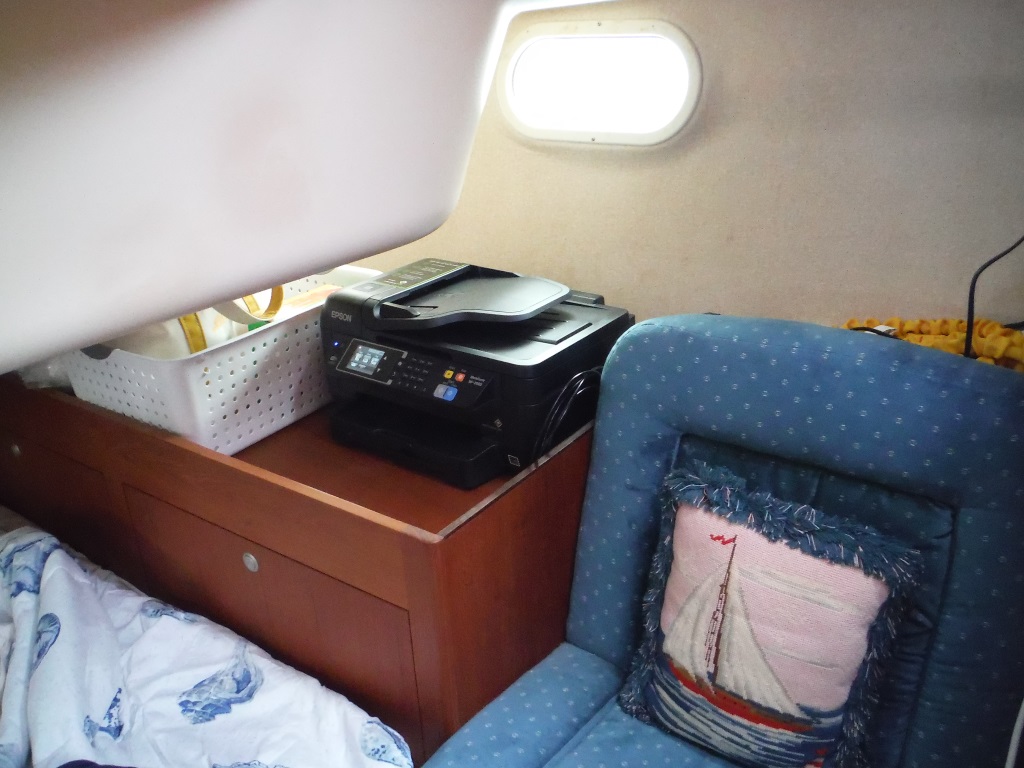 I just need to mount a securing strap to latch it down for when we’re out sailing. I had hoped to find a mobile printer that wouldn’t require AC power to work, but none of the available models had all the features we were looking for. This one should run just fine though from a small plug-in inverter. And the price was definitely right. You can buy a WF-2660 on Amazon delivered to your door for only $89. It blows me away that something this amazing costs so little, when two pieces of clear plastic and some wire (i.e. eyeglasses) can easily top $500 (that is a rant I’m going to have some day!) No idea how durable it will prove to be, but it’s worked perfectly for two months now, and at that price, I really won’t cry that much if it bites the big one after a year or two and has to be replaced.

So how did I get from taxes to printers? Well, as usual, we owe the IRS some money again. Not much, but it means we have to send them a check. And that means that rather than filing electronically, it gets done the old fashioned way, printed out and stuffed in an envelope and sent via snail mail, postmarked on April 15th. Because while we accept that we can’t avoid paying taxes, I have no problem with making our favorite Uncle wait for his pound of flesh for as long as possible.

It’s been a while since we’ve given something the Life On The Hook™ Seal of Approval. Epson WF-2660, this one’s for you!

One thought on “The Printer And The Pound Of Flesh”