Consider this one of those unknown unknowns that I mentioned in my last post. 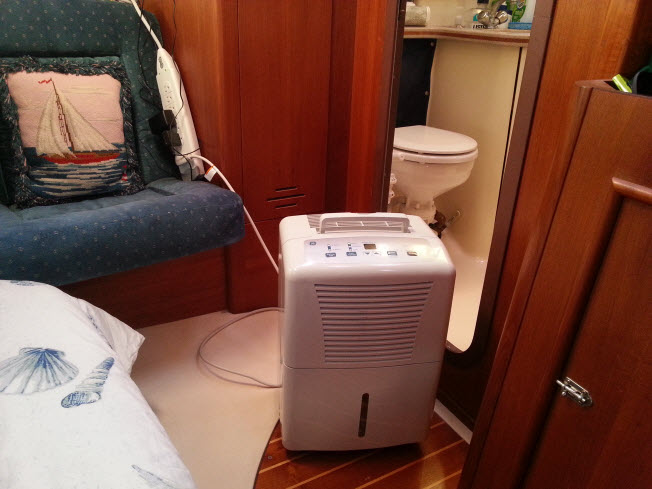 We moved onto the boat two days after Christmas. The weather was cold and damp—typical late December conditions around these parts. We have a very nice heat pump onboard, which does a pretty good job of sucking warmth out of the water we float in and using it to heat up the boat (at least until it gets freakin cold like I mentioned in Waiting For Global Warming. Then it needs some help).

So do you know what air does when you heat it? It sucks up water like a man lost in the desert who just stumbled across an oasis. And with Rhonda and I taking showers, washing dishes, or even just exhaling all day, there was plenty of water around to suck up. Then after it’s all warm and moist, the air starts moving all around the boat, because it’s air and that’s what it does. In the process, it comes in contact with cold things, like the ports (windows), the inside of the hull, or the deep inner recesses of lockers and drawers. where it turns back into cold air and spits out all the water it absorbed. Suffice it to say that after two or three days, we knew we had a problem. The bed felt wet. Our cloths were moist and clammy. I’d reach under our mattress to pull something out of storage, and find puddles forming. The final straw was when I reached for a cigar, and saw with horror that my humidor read 85% humidity (and rising). It should never ever ever be above 70% or else the cigars taste like crap. This would not do!

We went to Home Depot and bought a dehumidifier, brought it home and plugged it in. It sucked buckets of water out of the air. For the first few days I was emptying it three times a day. But we could tell an immediate difference.

Are you moving onboard, tossing off the lines, and heading over the horizon? Then you can probably do without one of these little jewels. They need a lot of power after all, since they’re basically small air conditioners. But if you’re going to be living onboard for a while, and you’re someplace where it’s too cold outside to leave the boat opened up 24/7, then trust me, you’re going to want one of these. Unless you just happen to like sitting in a cold sauna.

For what it’s worth, I’m feeling right at home. Back in my submarine days, maintaining the right atmosphere was a big part of our job. When you spend 10 weeks sealed in a metal tube with 150 close friends, there’s constantly something that has to be added to or removed from the air to keep it breathable. At least here we don’t have to make our own oxygen or scrub carbon dioxide. It’s just temperature and humidity we have to watch. Well, and propane. Have to be careful with that. Oh, and battery gasses. Those are trouble too. And sewage odors now that I think of it. Have to keep those bilges and sumps clean.

Damn, maybe this is more like the old days than I realized…