I remember watching Bill Nye (the Science Guy) on a Seattle talk show back when he was still a Boeing engineer trying to make it in show business. The host asked Bill if he ever bought lotto tickets, to which Bill replied, “No, the lotto is just a tax on people who don’t understand probability.” I laughed, because he was right. Your odds of winning the lotto if you buy a ticket are statistically equivalent to winning if you don’t buy one. In other words, virtually zero. But if I were to ever buy a ticket, and somehow against all odds we became fabulously wealthy as a result, I’m pretty sure one of the things I’d like to do is find a condo in downtown Seattle that we could use every year from August 1st until September 15th. Because for those six weeks, there are few places on the planet as glorious as the Puget Sound area.

As I mentioned in a previous post, Rhonda and I wanted to get away from all the boat buying/house selling rigmarole for a while and take a little vacation to celebrate our anniversary. Since our special day fell right in the middle of Seattle’s weather sweet spot, I decided the best gift I could give her this year was a surprise trip to the Pacific Northwest to watch a Seahawks game and visit our old hometown of Port Orchard.

As many of you know, flying from Pensacola to almost anywhere requires a layover in Atlanta. My mother used to joke that when you died, you had to make a stop in Atlanta to get to heaven. Checking Delta’s schedule, I saw that Atlanta to Seattle was a five-hour flight. That was just too damn long to be shoehorned into a half-size-too-small seat being fed peanuts like a zoo animal. This was our anniversary after all. I wanted it to be as stress-free as possible. So unknown to Rhonda, I booked us into first class. It was the “something else” that I mentioned in the previous post that I was keeping a secret. I thought I was busted when she started pushing me to give her a copy of the itinerary, and I knew I was made when the clerk handed her her boarding pass at the airport, which clearly said “Seat 4D Sky Priority”. But somehow she never noticed, and it wasn’t until we were actually boarding the plane that she realized what I had done. Score one for the home team! 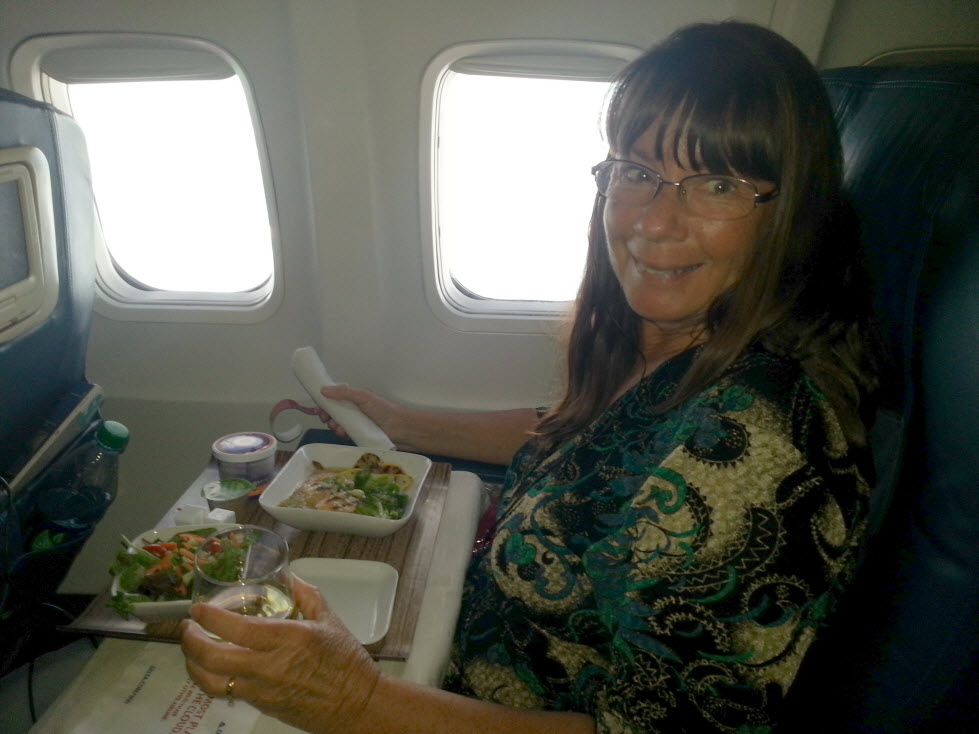 Wine, A Meal, Room To Stretch – Why, This Is Almost Civilized!

Our bottomless glasses of Woodford Reserve left us in such a good mood that we didn’t really mind that our bags took the scenic route, arriving at SeaTac on a different flight 90 minutes after we landed. We picked up our rental car and headed toward our hotel in Bremerton, on the west side of Puget Sound. 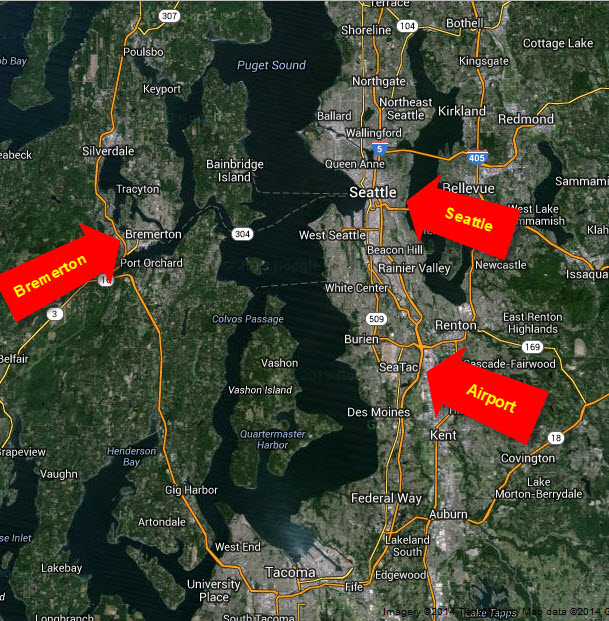 Why all the way over in Bremerton, rather than Seattle? If you’ve ever ridden the Washington State Ferries, you’ll understand. They’re an attraction all on their own. A hotel in Seattle within walking distance of CenturyLink Field, where we had tickets to the NFL season opener, was $250 to $300 a night. The Hampton Inn in Bremerton was $83 a night, and it was right across the street from the ferry terminal, where we could catch a ride for $8 roundtrip to downtown Seattle and an easy walk to everything we wanted to see.

The view from the hotel, with the Seattle ferry approaching: 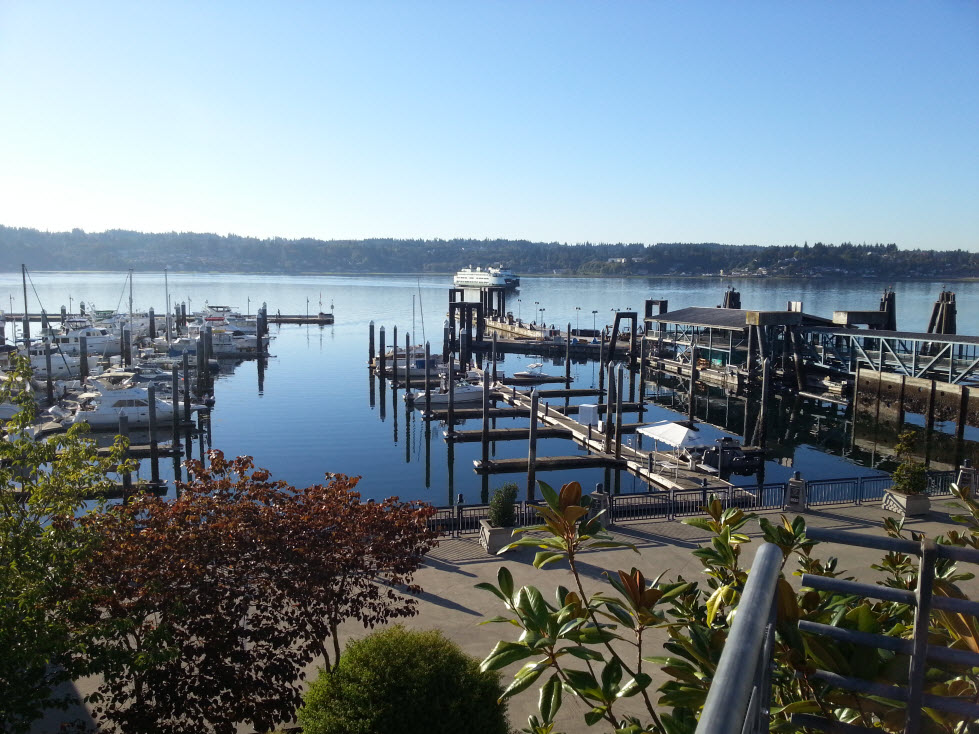 So after spending a pleasant hour doing this: 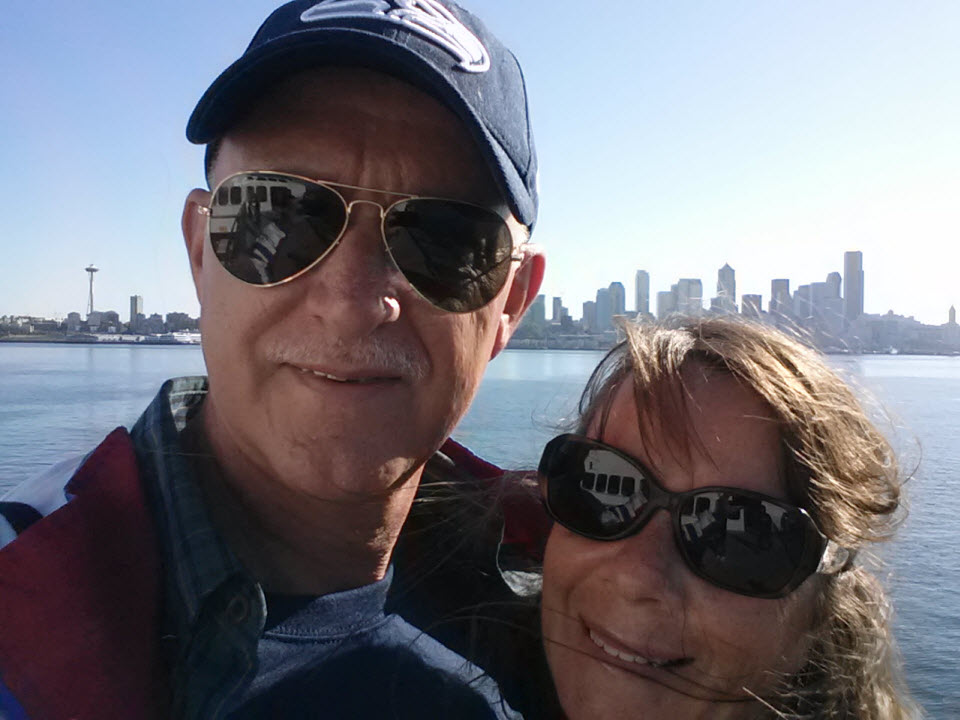 You arrive here, with most of Seattle’s major attractions within easy walking distance. 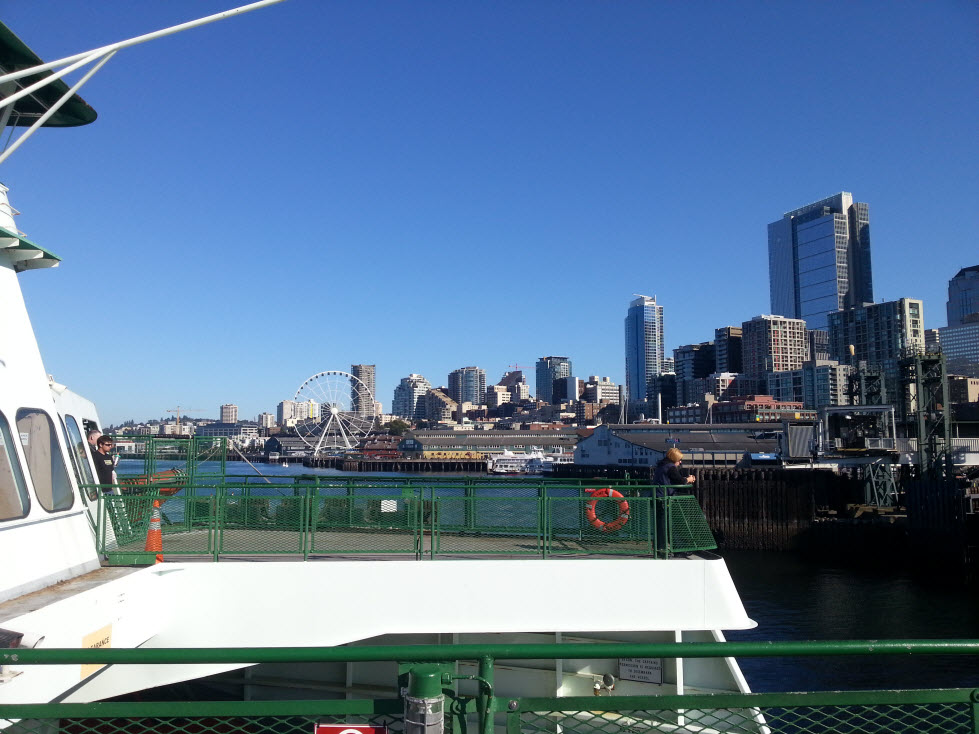 But first we headed west. You know how you can live in an area for years but never get around to doing all the touristy things that people come for miles to see? Even though we’d once lived here in the great northwest for fifteen years, we’d never taken the time to go whale watching. So we planned to remedy that. Bremerton to Port Angeles is about 90 minutes, where the fine folks at Island Adventures took us on an amazing journey.

The next day was Game Day, and we were beyond excited to be heading to CenturyLink to watch the Seahawks take on the Green Bay Packers in the 2014 NFL season opener. But first we had a brief detour. Lunch at the Space Needle!

Then is was showtime. It was absolutely amazing to be immersed in a city so completely in love with its team. The Twelves were everywhere!

And what an awesome stadium. The old Kingdome used to be a confined and almost depressing venue. But this place was magnificent. And the game was stupendous!

We wanted the experience to last forever. We lingered, just taking it all in, one of the last to leave, because we have no idea when life may allow us to pass this way again. 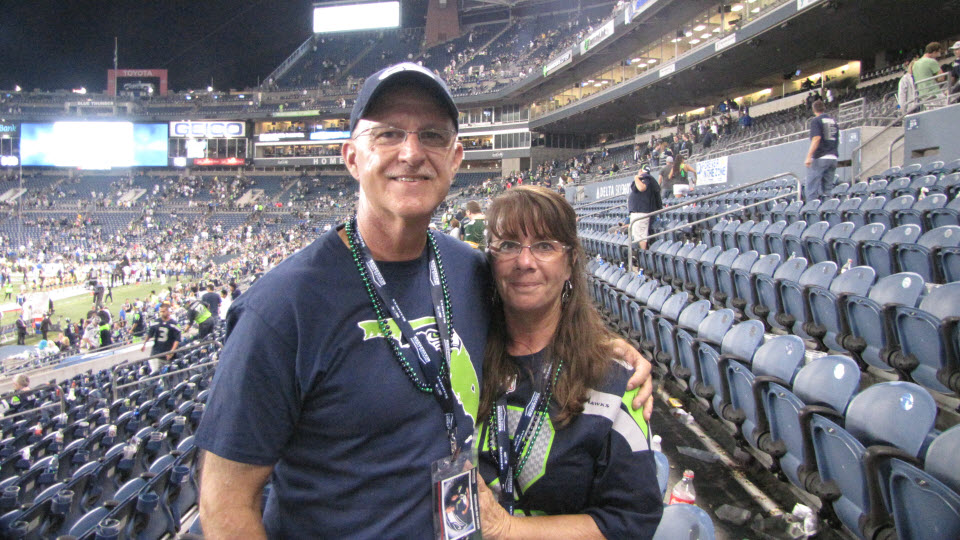 We finally had to reluctantly head to the ferry to catch a ride back to our hotel. But look at how the city honored its team and their fans! (Click to enlarge if you don’t immediately see it)

God how we love that town! From August 1st until September 15th anyway. The rest of the year, we’ll take a warm sandy beach and a fresh mojito, please!

On to part two…