One of the great things about living on the Gulf coast is that even when we’re too busy to take the boat out for the weekend, we can still squeeze in a few hours on a Sunday to do this:

Sitting by the ocean drinking bottomless Mimosas and splitting a six-egg omelette while listening to steel drums is an awesome de-stressor. And we’ve definitely wanted a little break from the urgent mop-and-bucket drills we’ve been running whenever our real estate agent calls to tell us we have another showing, and our ongoing possessional triage that we have to continue finding time for (Another Post, Briefer Than Most). If that weren’t enough, Rhonda has also now been having to tend to her father, who has put himself in the hospital for the second time this year. He’s 83, stubborn as a mule, and lives a life that we consider detrimental to his physical health. You know that old joke that goes “I spent most of my money on liquor and loose women, and the rest I just squandered.” That’s Rhonda’s father in a nutshell, at least since his wife died some years ago. If he’d knock it off and take better care of himself, he wouldn’t be taking quite so many ambulance rides and we could all spend fewer major holidays sitting in waiting rooms. Unfortunately, any attempt by Rhonda or her sister to conduct an intervention results in much anger and yelling (by him at them). So here we are on a sunny Sunday morning letting a champagne and orange juice buzz melt our cares away while the soothing sounds of Pensacola Steel whisks us to our happy place.

It’s a beautiful day with clear skies and a light sea breeze. It’s a bit hot, but hey, it’s Florida in August after all. But then we noticed it getting dark to the north. Polishing off our final round of drinks, we strolled the several hundred yards over to Red Fish Blue Fish on the Santa Rosa Sound side of the island to see what was brewing. Normally, it looks something like this: 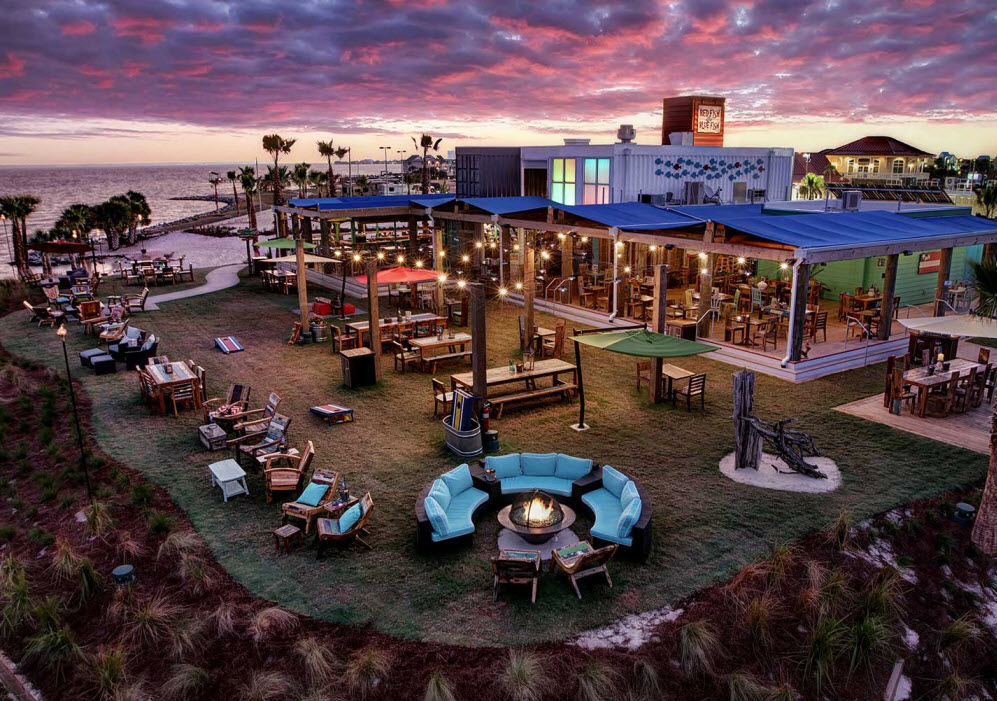 Within minutes of our arrival, however, the once pretty day turned to this: 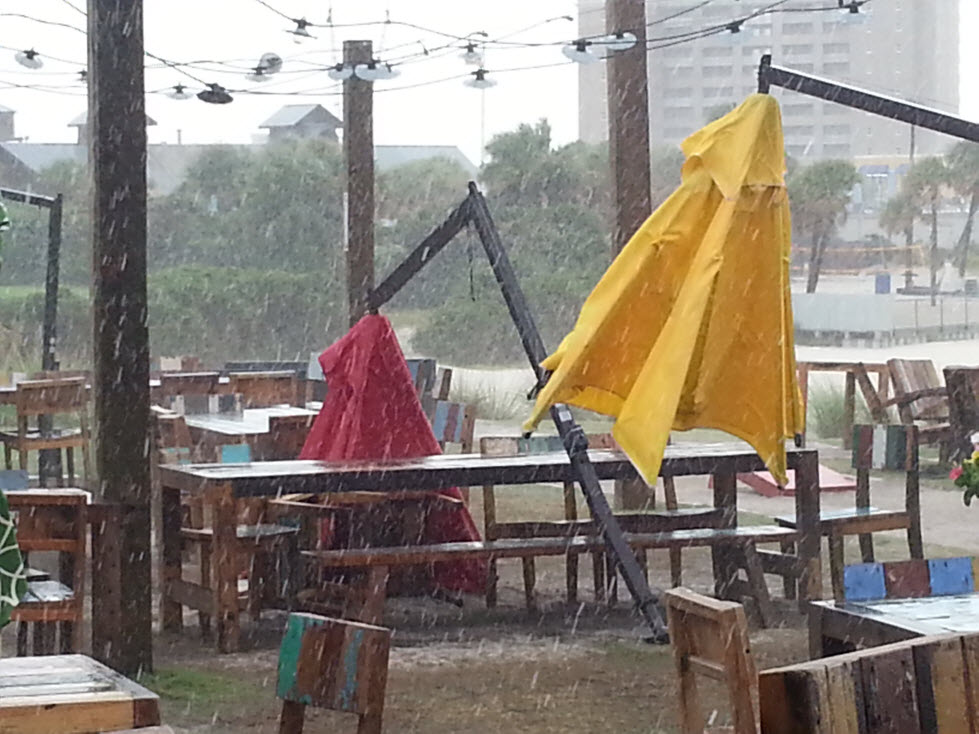 The wind started howling, the rain started pounding, and drinks starting flying everywhere. Patio umbrellas cemented into the ground were being ripped free. The water that had been calm just moments before was whipped up into steep rollers. 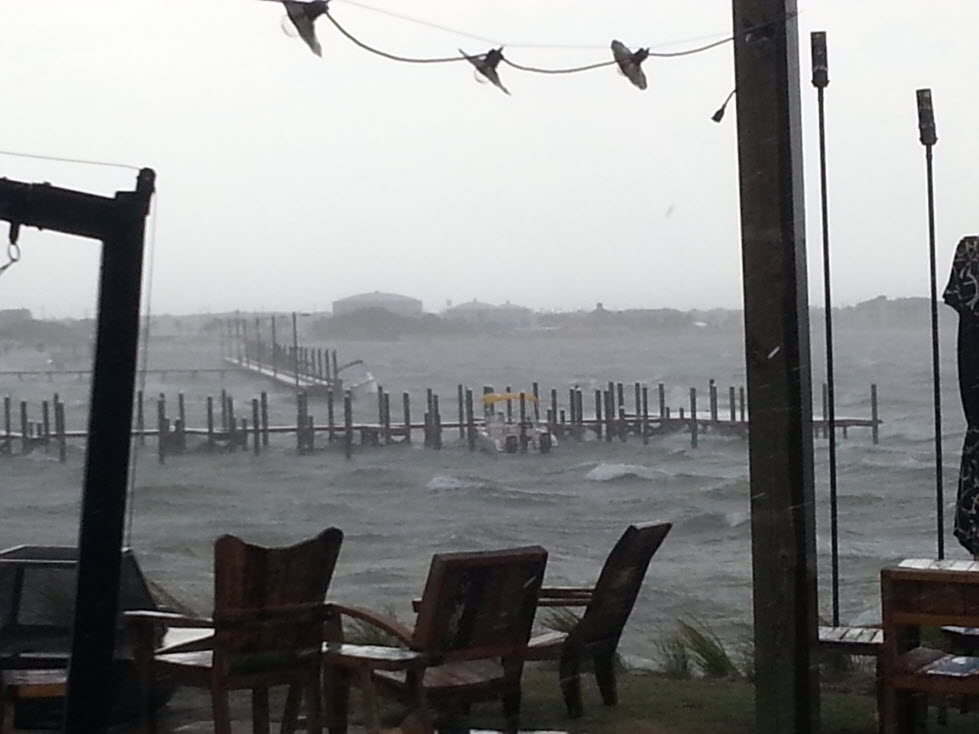 Small boats tied to the pier were being lifted four to six feet and then thrown against the pilings. Boats that weren’t docked dragged anchor. An unexpected 50 knot wind gust will do that. One boat was pushed up onto the beach. Another came within feet of hitting two others that weren’t dragging quite as fast. Fortunately these were all 20 to 30 foot runabouts, and not deep draft sailboats.

And then in ten minutes, it was over. The wind died, the rain stopped, and the sun started to peek back out from behind the passing storm cloud.

The owners of the boats that had dragged had probably all set inadequate recreational anchors on all-rope rodes and then gone ashore for lunch. They weren’t expecting foul weather on such a pretty day. But we’ve been caught in one of these pop-up storms before, and we dragged as well. Our problem was that we were using one of these: 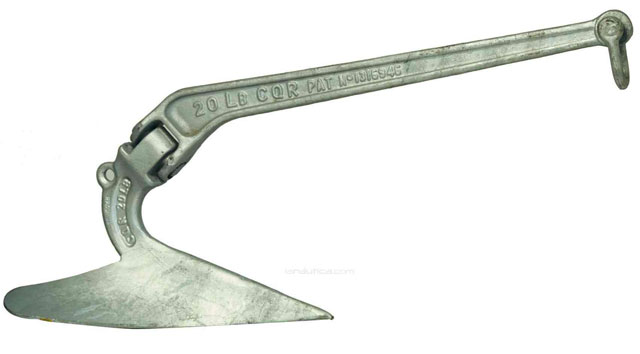 When this little jewel was developed back in the 1930’s, it was the state of the art in small craft anchors. But that was a time when the typical anchor looked like something Popeye might have used: 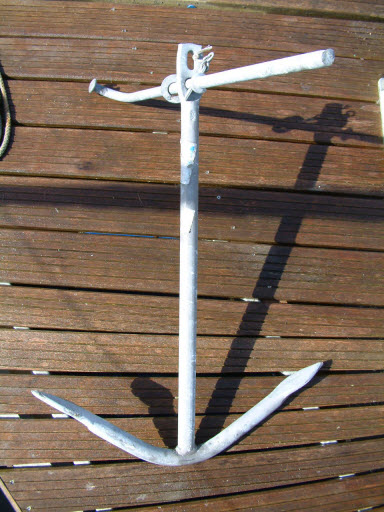 Pretty much anything, even a rock tied to a rope, would have been an improvement. And because the plough anchor (which is actually the correct spelling, because it was developed in the UK—it would have been a “plow” anchor if an American had thought of it) , or CQR as it’s known, performed so much better than what little else was then available, it developed a reputation as an excellent anchor. But there’s a reason boaters today don’t use hemp lines and kerosene running lights, or much other gear from 80 years ago. It’s because the modern equivalents are so much better. It took us a storm or two to figure it out, but the same thing is true of anchors. Today’s modern designs, such as a Rocna, Manson Supreme or Mantus, have ten times the holding power as that CQR relic from the 1930’s. If you’re interested, here’s some information to consider:

For those more visually inclined, you may want to take a look at this:

It can really ruin your day if you return to your boat and find it’s not still sitting where you parked it. A good anchor, and by that I mean one of a modern design that’s a least one, possibly two sizes larger than that recommended for your boat, probably costs less than 1% of what your boat is worth. And that seems like pretty cheap insurance.

So please, don’t be that sailor whose boat breaks loose and wrecks havoc in an anchorage during a pop-up summer squall. If you have something hanging on your bow roller that was designed during the Great Depression (the FDR one, not the Obama one), then we strongly suggest you think about an upgrade. If not for you, then for those with whom you share the harbor.

We use a Manson Supreme, by the way. So far, it’s been like being welded to the bottom. But before we head to the islands, I think we’ll be hanging a 60 pound Mantus on our roller. Because we don’t want to be “that boat…”

2 thoughts on “Thoughts On Staying Put”