The year we bought our first boat, we were “boat poor” and couldn’t afford a dinghy. I had an old pool raft that I had owned for more years than I care to admit (let’s just say it was from a time in my life when Spring Break was still a thing for me), and we used it to paddle to and from shore. 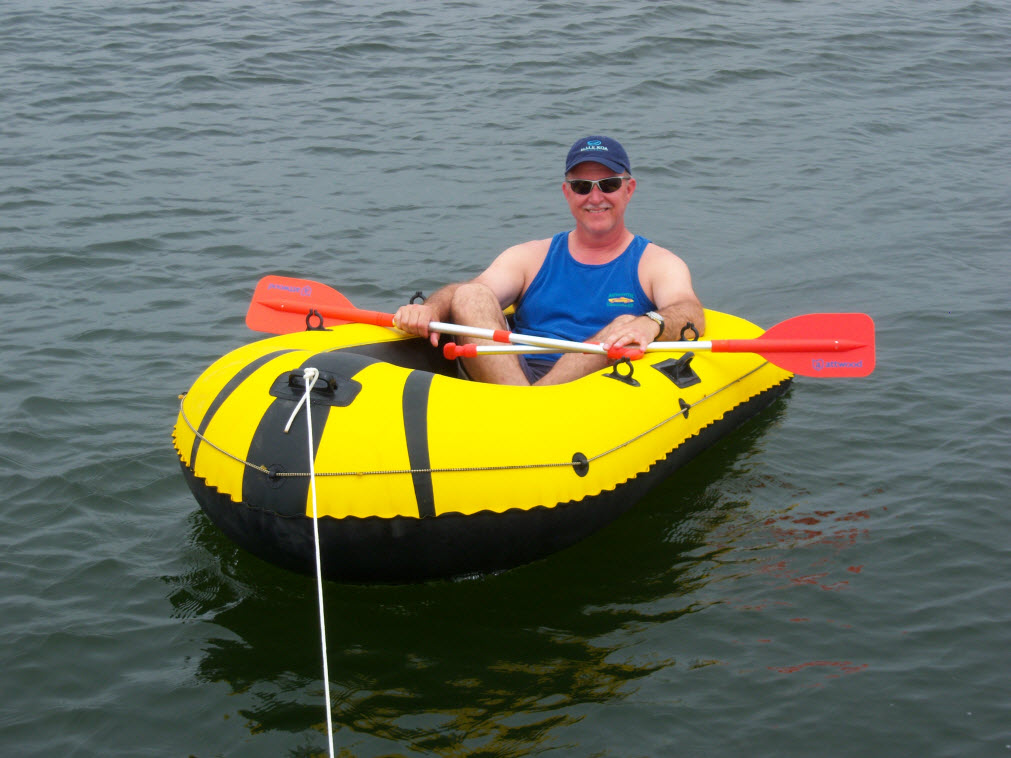 How Cool Am I?

It did the job (barely), but it was very, how shall I say it, “cozy” for two, and so damn difficult to paddle that we always had to anchor much closer to the beach than we liked. We did laugh ourselves silly a time or two as Rhonda and I corkscrewed around, paddles flailing, as we attempted to make the beach. But a few afternoon-thunderstorm-driven anchor dragging incidents taught us why the phrase “lee shore” strikes fear in sailors hearts, and we knew we needed a better solution so we could anchor further out.

The second year we owned the boat we bought ourselves a shiny new Mercury airdeck CSM (Hypalon) inflatable for Christmas. We named it Eaglet. What a difference a decent tender makes! Now we could stay several hundred yards off the beach. We were only limited by how long my arms could hold out, since we had to row ashore. 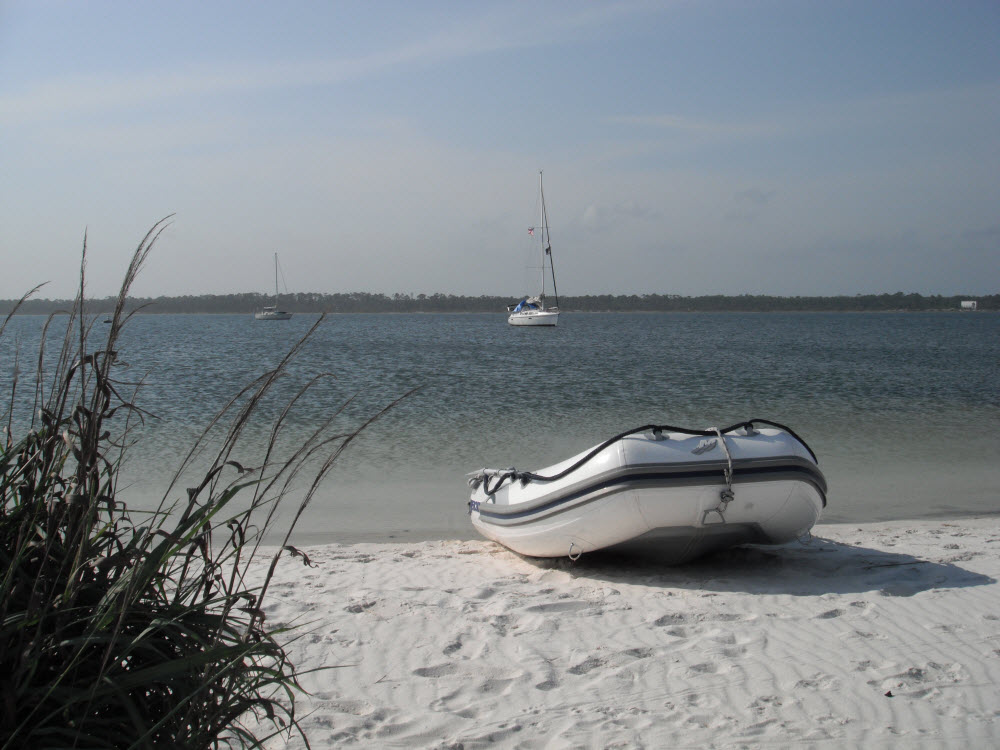 Eaglet was easy to tow while we were sailing, and we worked out a way to use the spinnaker halyard to lift it onto the foredeck between uses. Life was good.

The third year we owned the boat we really stretched out our range by adding a 6HP Tohatsu outboard. Since I knew I was going to have to strongback the outboard on and off Eaglet every time we wanted to use it, we limited ourselves to the largest single cylinder model they made, the six horse. Stepping up to an eight or ten horse like I would have preferred would have required a two cylinder, which would have been too much weight for my poor old back to handle. Try doing the squats on a rocking platform while bear hugging a heavy, oily piece of toe-crunching, finger munching machinery with buttheads on jetskis throwing wakes at you and you’ll see what I mean!

It took up residence on our stern rail. We used an Edson outboard mount, which is a really nice piece of gear – highly recommended by us here at Life On The Hook™. 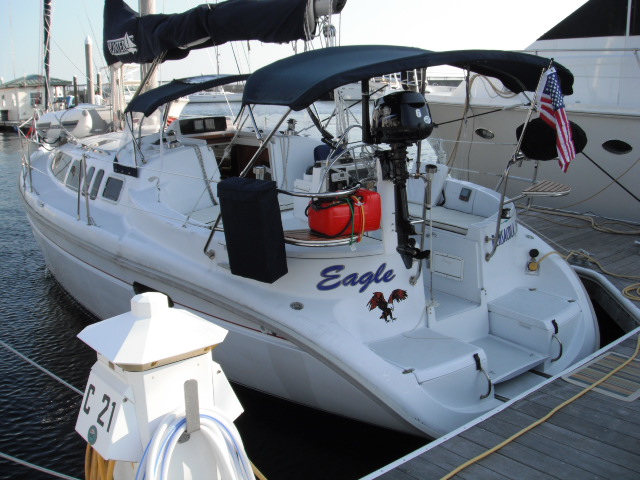 With our new found mobility we could now range across the entire anchorage in search of the perfect Bushwacker. But the intricate ballet required to launch the dinghy and mount the outboard was tiresome. I started looking with envy at boats with davits. That’s the ticket – davits! Life would be so much better if we could just drop anchor, lower away on the dinghy, and be sitting at the bar sipping our first Margarita less than 15 minutes after dropping sail. Another year and twenty five hundred dollars later, we were in business. 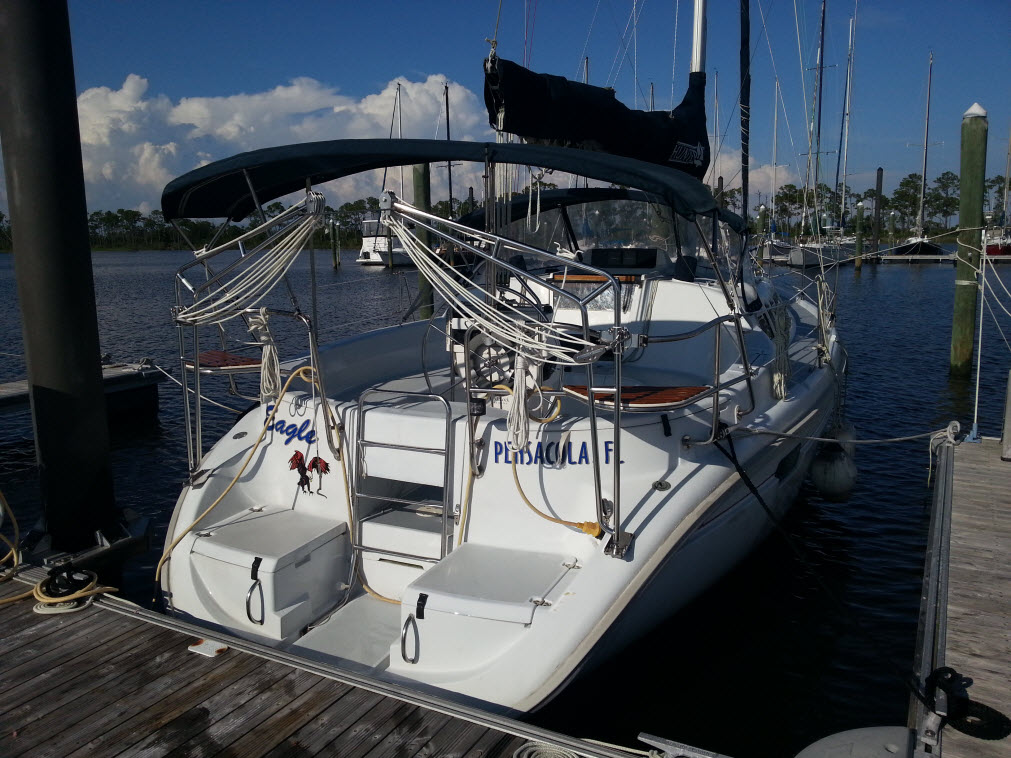 At this point we ran smack into the law of diminishing returns. The modest investment we’d made in the dinghy had made a big difference in our enjoyment of our boat, and purchasing the outboard had paid huge dividends by greatly extending our range and letting us get where we needed to go fast. But the davits. Well, let’s just say that in my opinion, they’re just not worth the expense for a boat our size. Raising the dinghy was at least as much a chore as hauling it onto the foredeck had been. Lifting it with the outboard installed put so much weight on the stern rail that it flexed alarmingly, so I was still taking the engine off whenever the dinghy came out of the water. Storing Eaglet on the davits just didn’t work. It would hang out over the dock too far (we like to back into our slip), and I was terrified of thunderstorms because I had nightmares of the suspended boat filling with rainwater and the extra five hundred pounds of weight tearing the stern apart. The davits had cost almost as much as the dinghy and outboard combined, and they honestly just weren’t worth it.

So along came our island boat, Eagle Too. And I thought I had a better idea. The dinghy fits on the bow even better that it did on Eagle because there’s so much more room. And once I reversed the stern seats to move the trademark Hunter cupholders out of the way, there was room to mount the outboard. But I didn’t want to have to go back to dancing with the greased pig whenever we wanted to launch the dink. What I needed was an engine hoist. A good, strong, not too expensive solution to what was actually my real problem – getting the outboard on and off the dink without dropping it in the drink or amputating a toe with the prop.

And Garhauer makes just such an item. 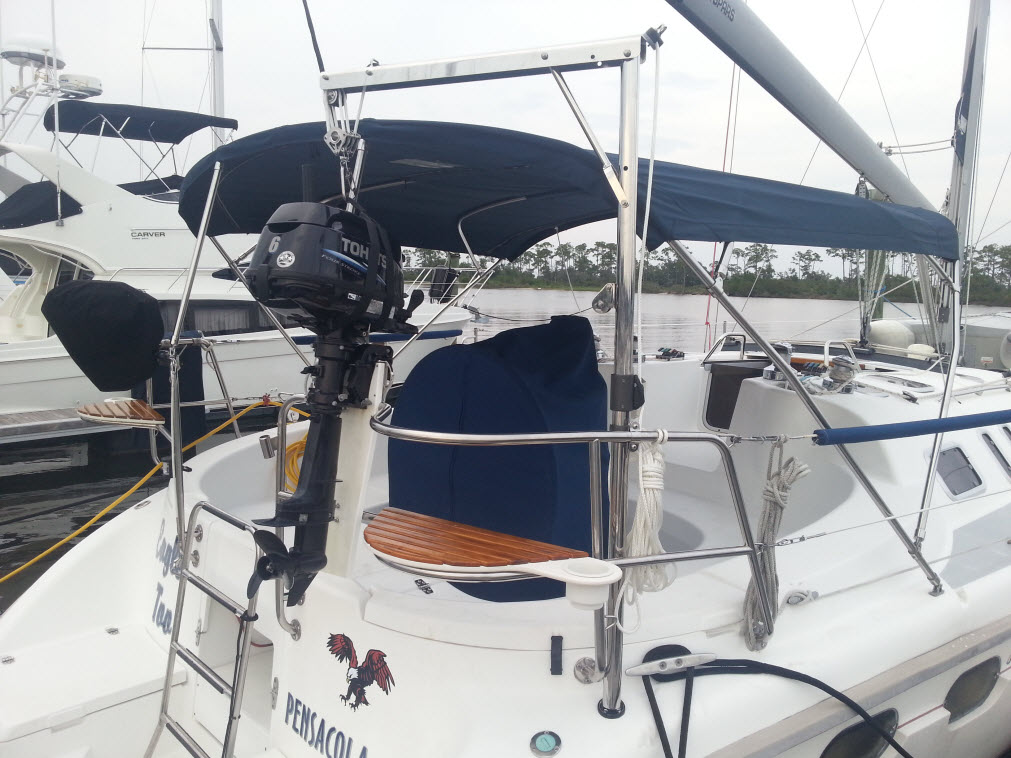 It was the perfect size for the space we had to work with, it had the perfect reach to lift the outboard from its home on the rail and swing it free of the stern, and at slightly less than $400 delivered to our doorstep it was just the right price. The perfect solution! Installation was less than two hours start to finish, and now that we’ve done one we could probably do another in under 30 minutes. And it detaches from the rail, folds up and stores in a locker in a jiff, although I personally don’t see the need.

If you’re not familiar with the gear that Garhauer makes, you owe it to yourself (and your boat) to look them up. They’re a family run business that makes all their own gear, have great prices, and actually answer the phone when you call them, giving darn good advice and technical support. If, say, you needed a hoist, but you wanted the mast to be taller or the arm a bit shorter, just tell them and they’ll make it that way for you.

That hoist is going to be a godsend when our future Life On The Hook™ has us depending on the Eaglet to bring fuel, water, and groceries aboard. I can’t wait!