That’s a phrase that was beaten into my head back in my Navy days.  Regardless of whether you fly planes, drive submarines (my job in a past life), or sail where the water gets skinny, don’t rely on your perceptions alone. Trust your instruments.

The waters here in the Pensacola area are murky. Rarely if ever can you see the bottom. Shoals are everywhere, and we really aren’t fans of running aground. We not only trust our instruments, we rely on them to get us from place to place safely.

When we bought Eagle Too, she came with a set of circa-1997 Autohelm ST50s. They were beyond obsolete. And I didn’t trust them. Oh, the seller insisted they worked great, but we were never able to get them to function. They’d just display random error codes, and a glance at the wind vane at the top of the mast showed that it insisted on pointing stubbornly south no matter which way the wind blew. I knew they had to go. 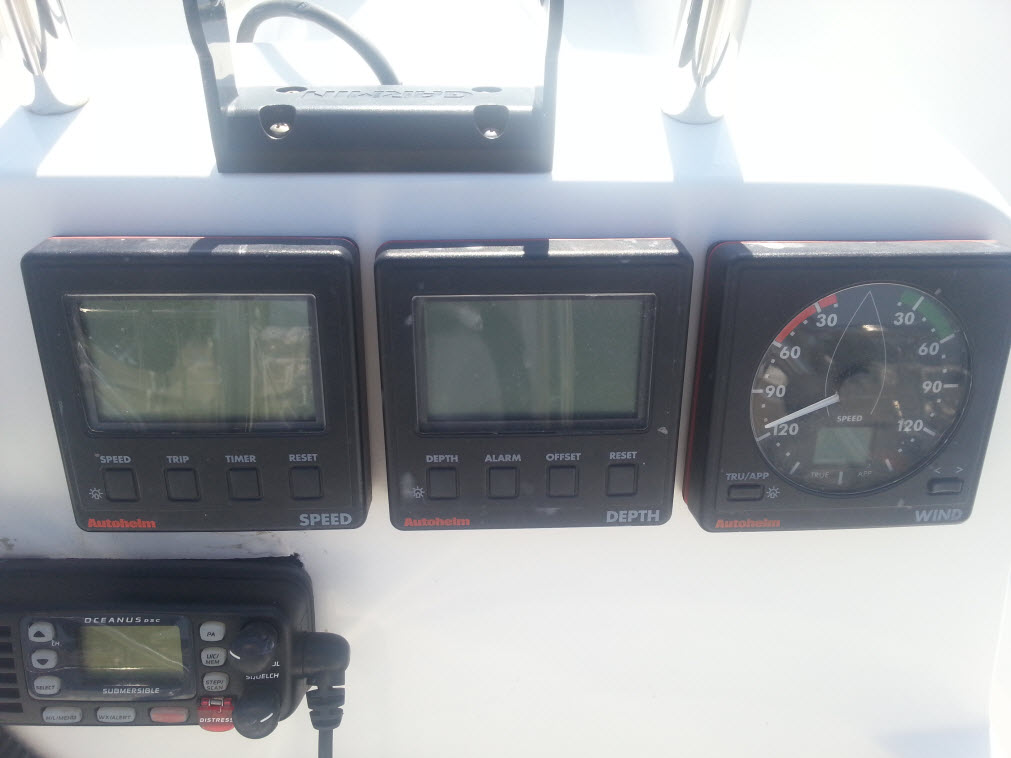 Since these old relics were made by Raymarine, I thought a new set of Raymarine instruments would mount in the same holes. I was wrong (it happens).

So many projects seem to require cutting or drilling holes in the boat. It’s unsettling at first, but you eventually get used to it. Placing the templates for the new instruments showed that I was going to have to do some significant surgery. 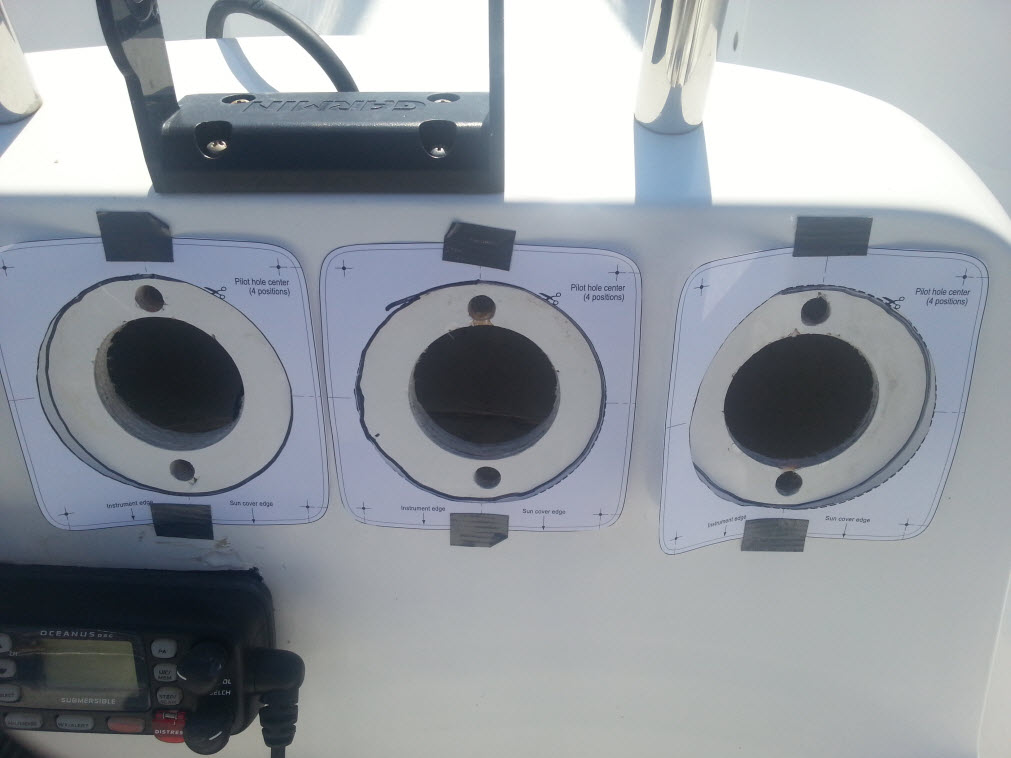 I puzzled for awhile about how to turn small holes into larger ones. Normally you’d use a hole saw, but there was nothing in the middle for the pilot bit to bite, and I had visions of a three and a half inch hole saw dancing all over the front of our shiny new (to us) pedestal like a giant fiberglass-devouring Tasmanian Devil. Better try the jig saw instead. 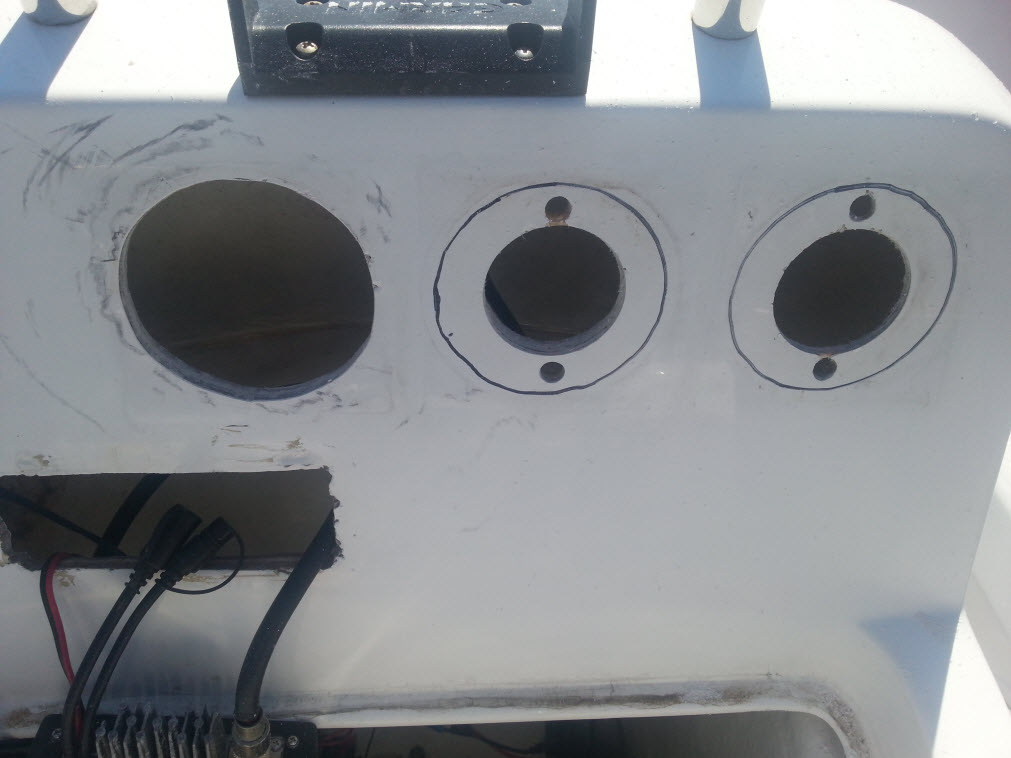 One Down, Two To Go

Well, it made a mess, but nothing a Magic Eraser won’t fix. On with the job! 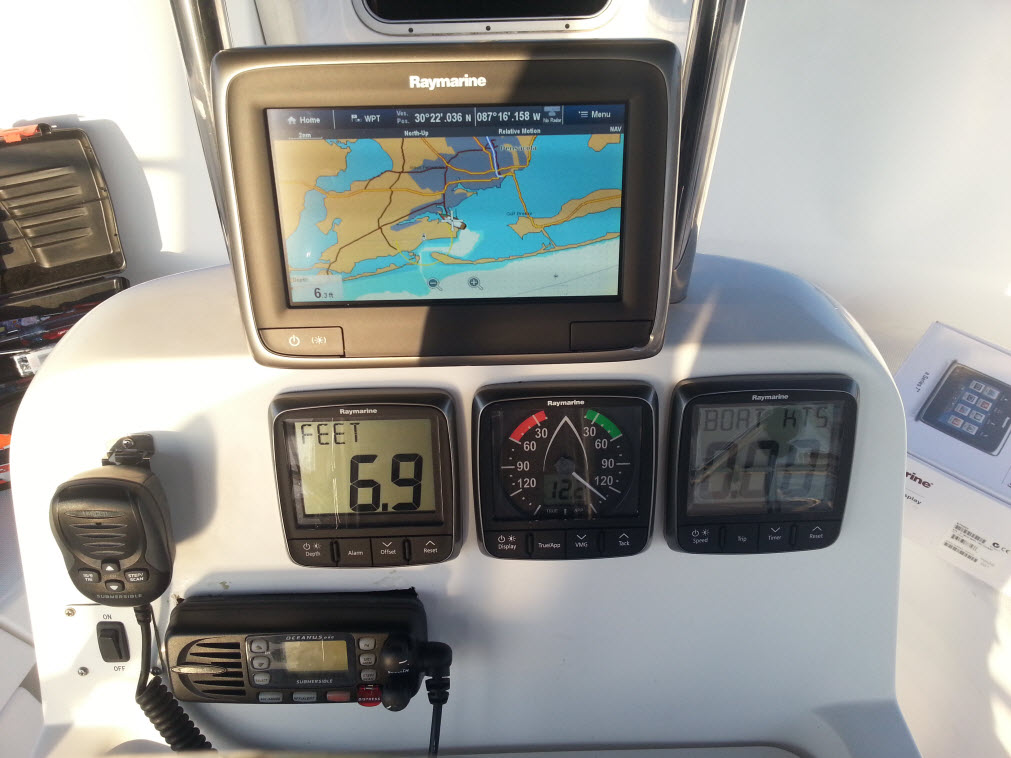 This is the point where I want to give an extra special mention to Rhonda, my dear wife and sailing companion. That shiny new multi-function display, the one displaying the chart of Pensacola Bay above, was her idea. When your wife says “Since we’re at it, don’t you think a touchscreen chartplotter with downvision sonar would be a good idea?” then who am I to question. It’s a very special woman who truly appreciates good marine electronics, and then is willing to spend two days on her belly in the bilge helping pull the cables needed to make it all work. My wife – I think I’ll keep her!

So check off another step in getting Eagle Too ready for the islands. But now that that job is done, I can’t help wondering what type of person would have spent $160K on a brand new boat back in 1997, but wouldn’t spring for the $30 for the flush-mount faceplate to trim out the radio? Those instruments look so good, and that VHF that’s just jammed into a somewhat rectangular hole is really bugging me now.

Off to eBay I go. Surely someone still has an old Uniden Oceanus DSC faceplate laying around…