A follower of our blog recently asked for some information about how we handled the whole name changing thing. You don’t have to search long to find many a cautionary tale about sailors who neglected to perform the proper ceremonies when renaming their vessels, and who subsequently suffered some form of catastrophe. You won’t find any, though, about sailors who took the time to do it right, and then later came to regret it. Since there was no apparent downside, and being at least as superstitious as your typical boat owner, we knew we’d sleep better if we observed the ancient traditions of the sea.

Step one was a deep dive into every locker, nook and cranny, from stem to stern, looking for absolutely anything onboard that had the boat’s old name on it. Woe to those who apply a new name to a boat that still carries any trace of the old! The gods would not be amused. So we examined every cup, plate, pillow case, sales receipt, maintenance record and spare part to make sure that the old name appeared nowhere aboard.

Next was the supplication. We were in a bit of a bind, though. We had researched the appropriate ceremony for denaming a boat. We just weren’t clear on exactly how one does it when the boat isn’t floating. But the old name was gone, and the new one was due to be applied the next morning, while the boat was still on the hard (sitting on land). We felt that putting a new name on a boat that hadn’t been properly denamed was courting disaster. Something had to be done. The gods must be appeased.

So like sailors always do, we improvised. We held an intimate little ceremony. It was intimate because it was late on a weekday afternoon and we thought it pretty unlikely that any of our friends would want to come hang out in the hot sun at the dirty, noisy shipyard just to watch us wrangle with our superstitions. Plus we didn’t have any cold beer on board to offer in consolation. The gods were the only ones drinking that day.

To make sure the denaming juju found its way to the sea, we then walked to the waterfront and chucked into Bayou Chico the Eisenhower silver dollar that the previous owners had placed under the mast. On it we had inscribed the previous name of the boat (OK, we wrote it with a Sharpie, but at least we were making an effort). We hoped the gods would appreciate the gesture, give us a pass on the fact that they couldn’t presently see the boat, and do whatever it is that gods do to erase the vessel’s previous name from their records.

With that step checked off, we started to make the boat ours. First thing was to replace the coin. For all of recorded history ships have had coins placed under the mast or in the seams of the keel before setting to sea. The legends say it was so that if any misfortune befell the crew, the coin would ensure that they could pay the toll to the boatman that would ferry their souls to the afterlife. No coin meant no ride across the river, which left the crew’s spirits drifting in limbo for all time like episodes of I Love Lucy on TV Land. Personally, I’m not too keen on the whole “misfortune befalling the crew” thing — I’d like to think it’s done now more for good luck and as a nod to past tradition. But we’re using the belt and suspenders approach to ensuring our future safety, so we definitely didn’t want to skip this step.

As I’ve previously mentioned in Is It A Sign?, Rhonda had picked up an 1882 Morgan silver dollar for the purpose. We wanted to show the boat that we were willing to throw some bling her way as part of earning her respect, so nothing less than a real silver dollar would do. Rhonda also wanted to include a coin from the year of the boat’s birth, so we dumped out our piggy bank and sifted through the loose change until we found a nice looking 1997 quarter. The rules are vague about what’s appropriate here, so we just went with what felt right to us and showed we were giving it some thought rather than just going through the motions. 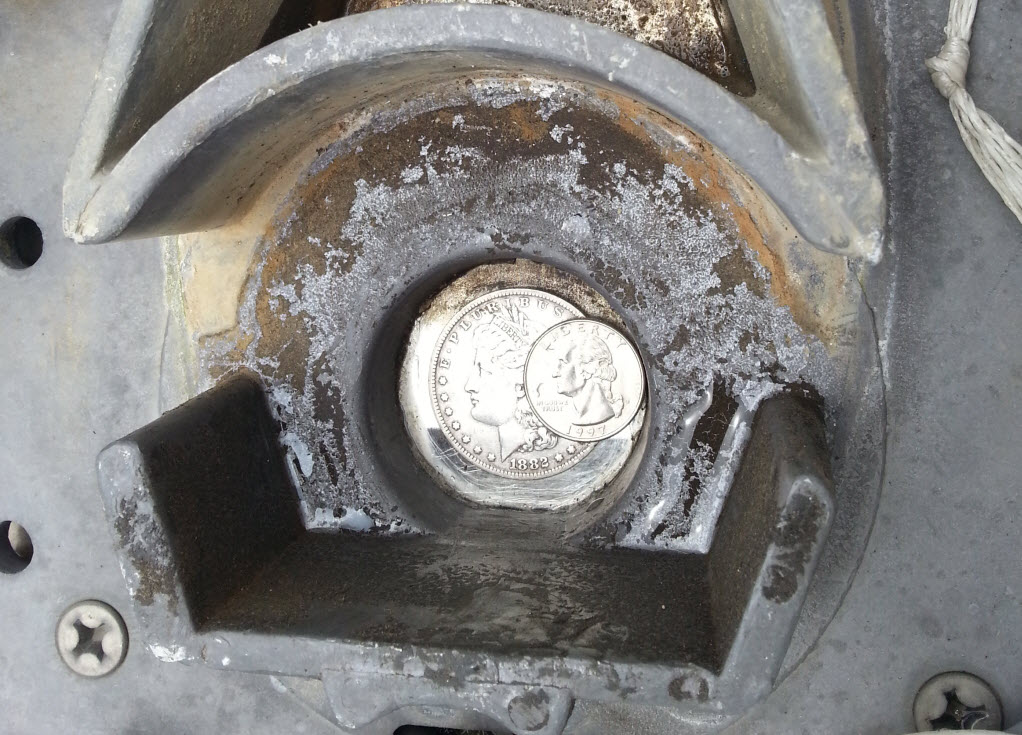 How Thoughtful Of The Builder To Provide The Perfect Spot For Coins Under The Mast!

The new name went on the next day without incident, so things seemed to be working so far… 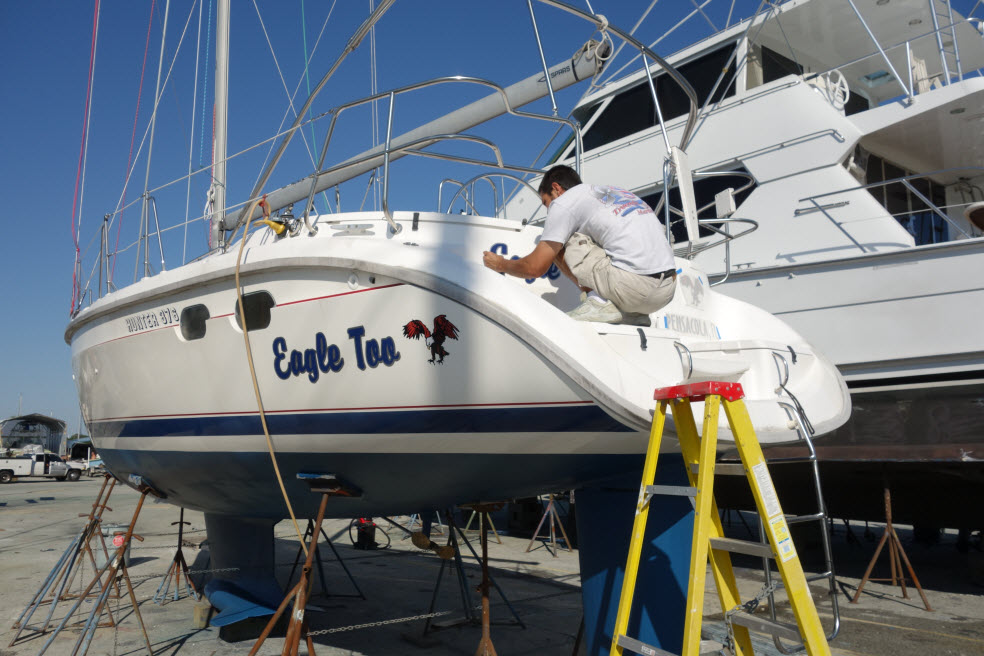 Then launch day was upon us, and Eagle Too (as she will forevermore be known) needed to be christened before getting her bottom wet. This, of course, required the sacrifice of yet another bottle of champagne. Oddly enough, there was a longer safety briefing for the bottle smashing than for any of the crane lifts. Those marine maintenance folks really have their priorities in order! 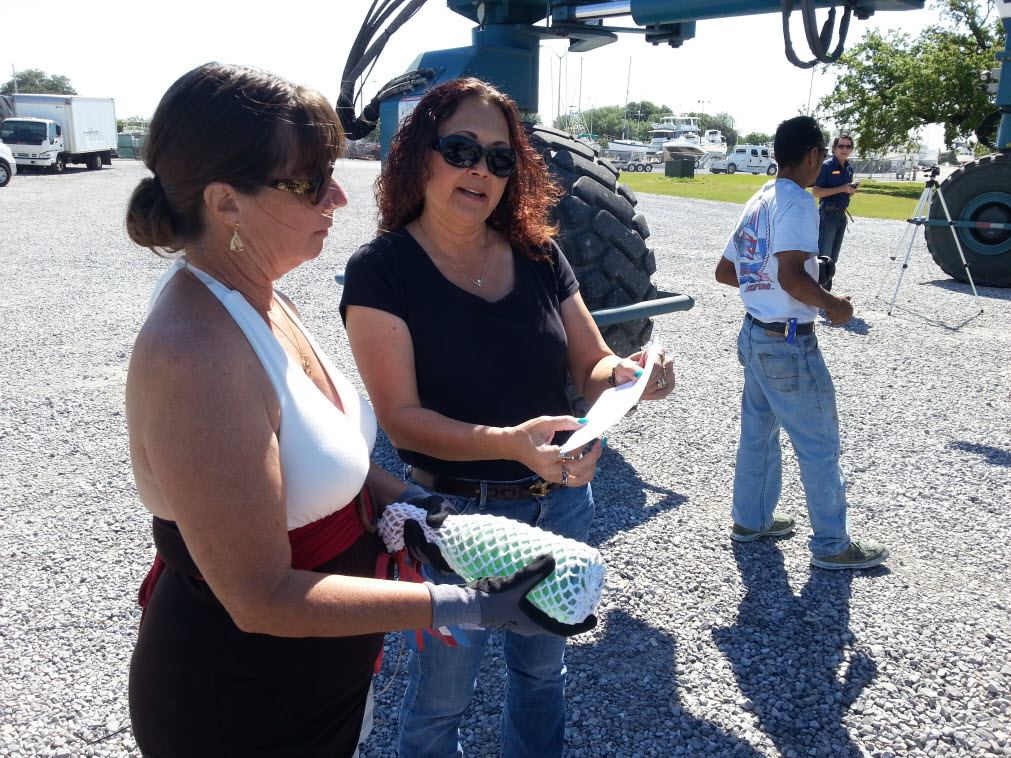 Rhonda did the honors, as it’s traditional for a woman to perform the christening. But you have to make sure the bottle breaks on the first whack. Unspeakably bad luck can follow otherwise, So the wind-up can be a bit nerve-wracking, as you know she only gets one chance at it.

Isn’t it interesting that the ancient gods of the wind and sea have never developed a taste for Bud Lite. You’d think that maybe they’d try to stay relevant by adapting to the times, but no, nothing but champagne for these deities! And there were several more bottles to be offered in tribute before this was all over.

After the christening, we were given the sock from the champagne bottle and told we should fly it from our flag halyard for the next 24 hours. Why? Hell if I know, but at this point if someone had told us that we had to wear each other’s underwear inside out on our heads all afternoon to ensure good luck, we were so with the program I’m sure we probably would have done it without question. 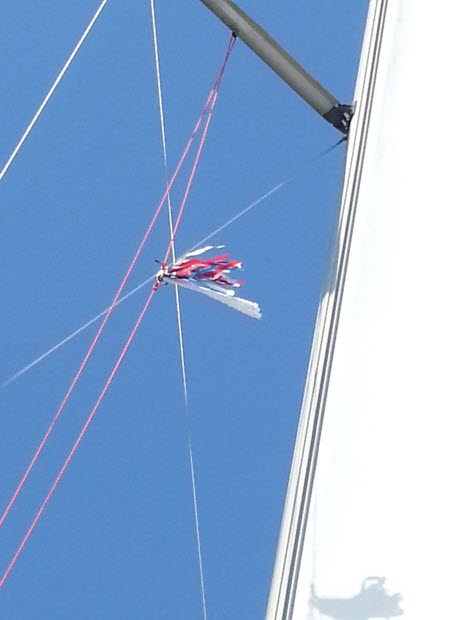 By now we felt like we’d covered all the basics and could safely venture forth without having to constantly look over our shoulders for malicious gods making mischief. But like a couple that elopes to make it official and then does the full church wedding a week later to please the family, we wanted our friends to share in the fun. So after a brief sail in the bay to test all the systems, a trip during which everything worked and nothing broke (happy gods are benevolent gods after all), our first stop was a slip downtown at Palafox Pier marina, where we had a more elaborate renaming ceremony planned the next evening for a dozen or more guests and a lot more champagne. You can find the specifics of the ceremony here: 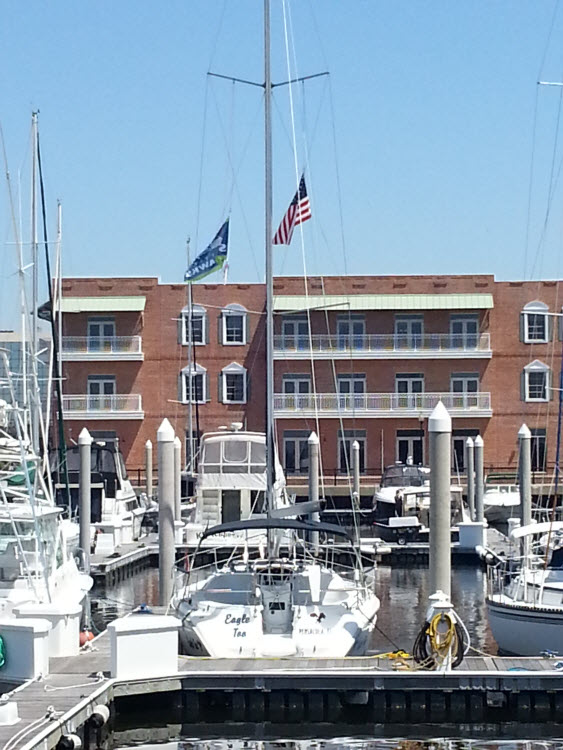 Slip C8, Our Home Away From Home

Look closely and you’ll see the champagne sock just below the Seahawks flag, which we’re flying because the Seahawks are the best team in the NFL after all. Did I ever mention that we used to live in Seattle and had season tickets?

The next evening, a boat load of people, from friends and relatives to folks we’d just met that day on the dock, joined us for Eagle Too’s formal renaming, which involved (among other things) pouring another bottle of champagne into the sea, followed by glasses full tossed to each of the four winds as they were called upon by name to offer their protection and support to our new vessel. All of the names on the hull were covered with bunting, which was removed for the big reveal once the ceremony was concluded. I’m pretty sure everyone there had a good time, because the champagne was a flowing, and not one person put their glass down long enough to take a single picture. We realized after it was all over that everyone thought everyone else was the designated photographer!

And so that is the basic process of renaming a boat. Had we succeeded? Were the gods happy? Did our careful attention to the spirit and intent of these ancient rituals afford us some future measure of protection from misfortune upon the seas? Only time will tell. But if one wished for a sign (and lord knows the crew of Eagle Too are all about signs), there was this to consider — at 10PM, at the moment the last of our guests finished their final glasses of champagne and stepped ashore, the following unexpectedly burst forth to our west:

If Neptune and Aeolus had wanted to lay a brief “nice job, guys, you did well” on us, I’m pretty sure it would have looked something like this.