Sung to a thumping blues beat:

I woke up this morning (Bah dah da dah dump)

I’m all out of sorts (Bah dah da dah dump)

I don’t like this feelin’ (Bah dah da dah dump)

Got those bottom job blues…

We cruisers are a frugal bunch. That means we do as much of our own maintenance as possible. I could say it’s because we realize that skills gained through practice create self-sufficiency, an important attribute for those who wish to travel the less populated regions of the planet on a boat. But it’s mostly because we’re cheap. Money saved through our own labor is that much more beer we can buy. But being frugal has its own cost.

When we bought our first boat in 2009, we knew she needed a bottom job. Having done one once as a very young man, (so long ago that the pain was forgotten) I knew Rhonda and I could do it ourselves and save several thousand dollars. So we crawled around for three days on our hands and knees holding electric sanders over our heads as a cloud of toxic red dust rained down on us. Our eyes were raw, our joints ached, and the flimsy paper dust masks we wore did nothing to stop the copper-laced paint from working deep into our throats, lungs and sinuses. I sneezed, coughed and spat up blood red gunk for days. Then, we spent two more days duck-walking around rolling on two coats of red bottom paint (three at the waterline), trying in vain to avoid the drips, drops and spatter that flew from the rollers. 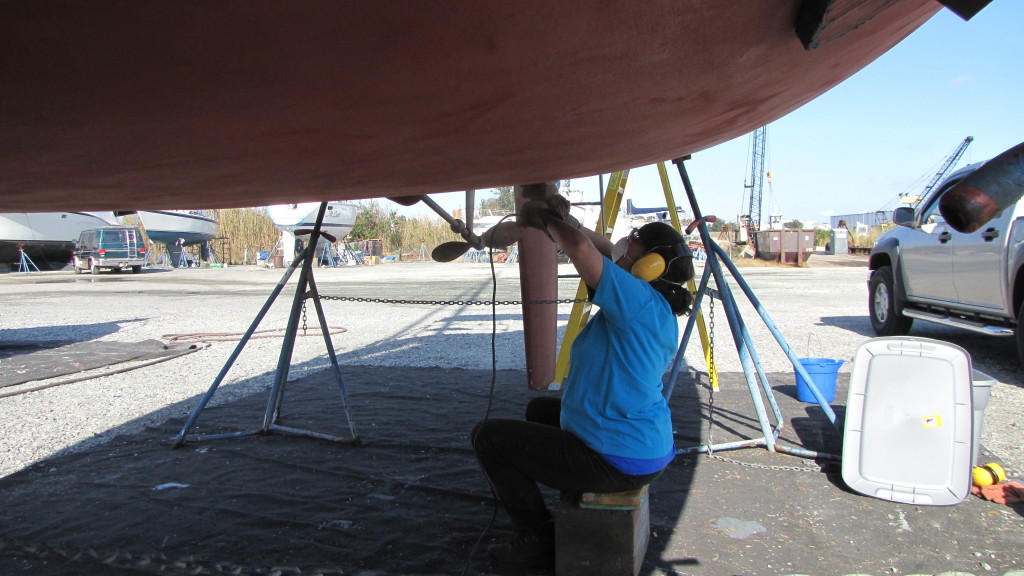 Your boat never looks better than when it has a new bottom. But the work sucked.

So now we have a new boat. And she needed a bottom. Blue this time. We like the way red looks, but we’re already changing this boat’s name, and we want to try and keep things as familiar and comfortable for her as possible to help her in her transition. So we’ll stay with her current color. But four years is not sufficient time for the pain to wear off. We’re still frugal, but in a more nuanced way. The worst part of the job was the sanding. So let’s pay the yard to do that part. Let them eat dust. And then we’ll just roll on the new paint and be done with it. 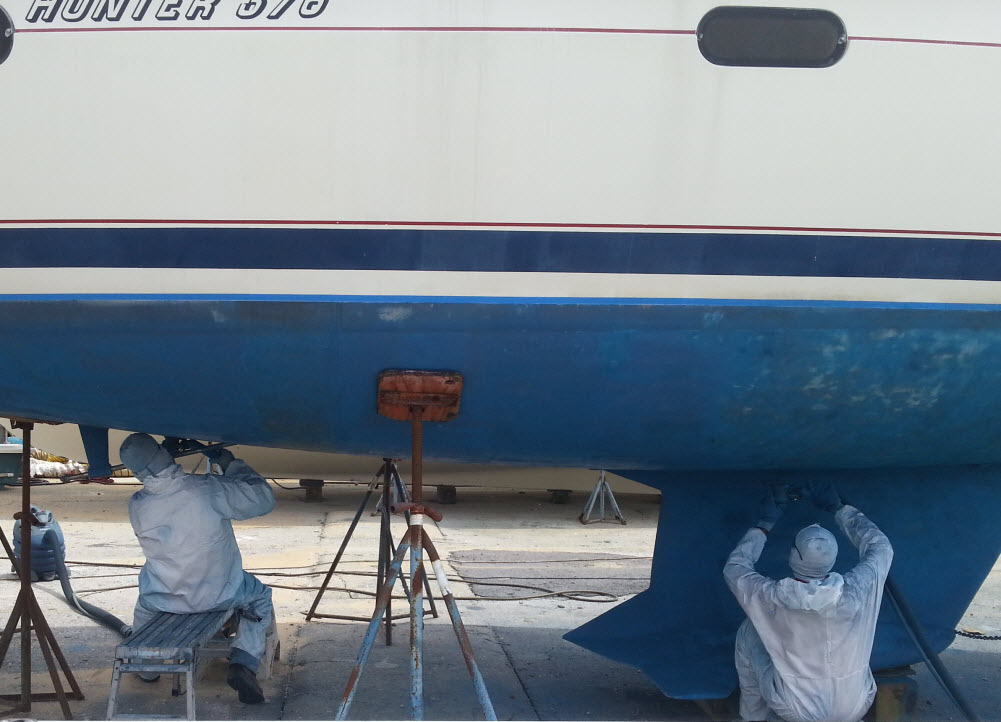 Just Look At All The Fun They’re Having!

You know what? Spending two days squatting while working over our heads is not one damn bit easier now than it was four years ago. We have blue freckles in places that I can’t imagine how paint ever reached. While we don’t have the persistent metallic taste in our mouths this time caused by ingestion of way too much copper, I feel like I’ve been worked over with a baseball bat. I think every can of bottom paint should come with a coupon good for one free hour of chiropractic care. 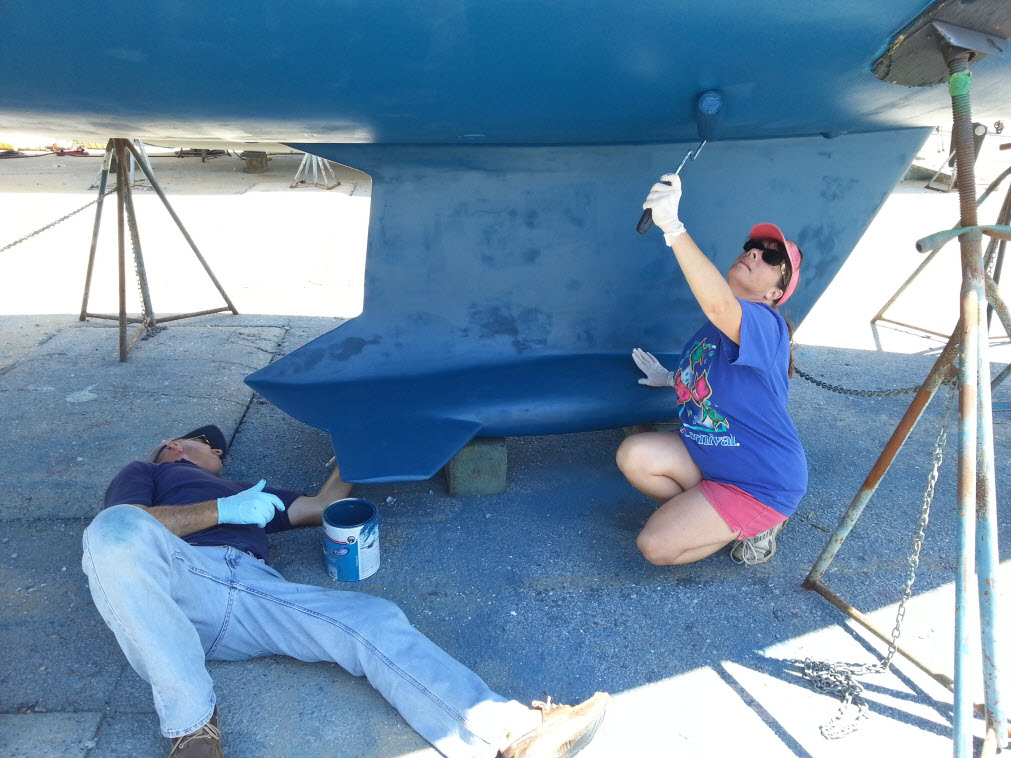 But she sure does look nice. And we saved a bit of money. I told Rhonda that with a little luck, our next bottom job will involve her and I sitting in the shade of a palm tree sipping cool boat drinks while watching a crew of hardy islanders do all the work at a boatyard in Grenada or Trinidad. Someplace cheap, exotic, and very very far from here. 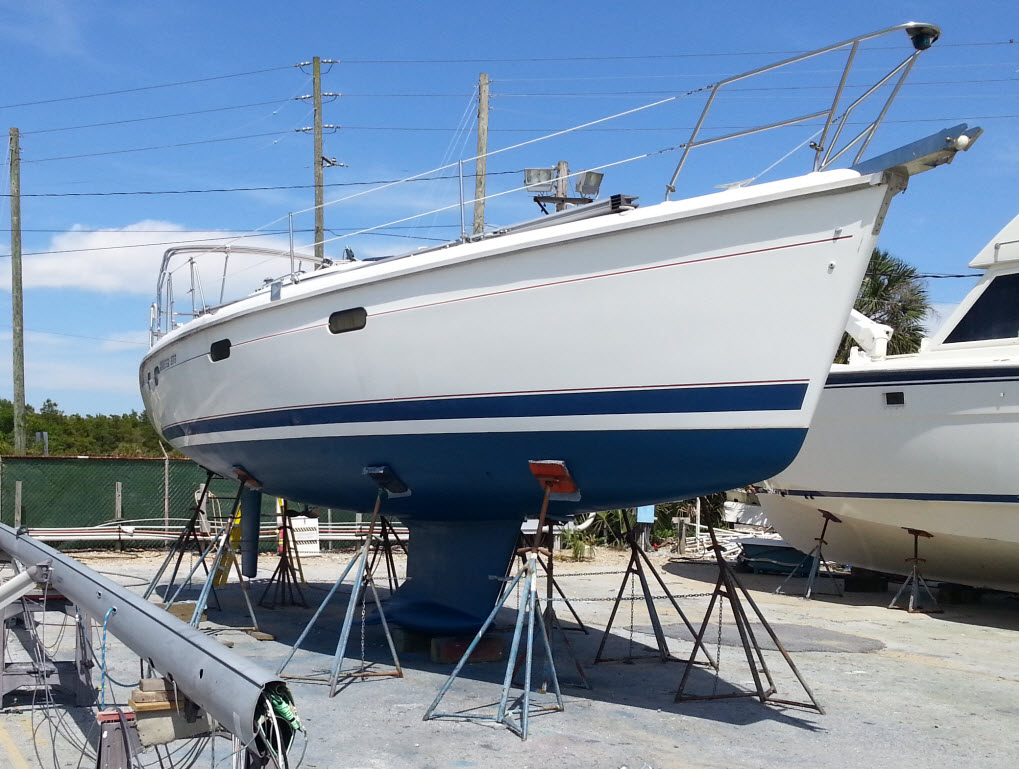 The Payoff For All The Hard Work

One thought on “Bottom Job Blues”